I think I have used that title before, but I like it.

It is a hot, muggy day in the Mohawk Valley. I did not run, I did not walk. Well, I walked. Just out into my yard, to take a couple of flower pictures for a blog post.

And still no captions. What the hell, WordPress? And yes, autocorrect, I DID want to say “hell” not “he’ll.” Sheesh!

Where was I? Ah yes, admiring my rhododendrons. It is nice I have at least one kind of flower in my backyard. I have not done my container garden nor any of the yard gardening I had planned.

My front yard is looking fairly cheery, too.

I am delighted with my peonies. They have such a lovely scent. The daisies are delightful, too, if a little out of control.

Then I backed up (carefully, because with my luck lately I might back into something and land on my ass) to get a shot of both.

I do not despair of having some semblance of a container garden. Perhaps this weekend I can work on it. Maybe I could muster some ambition to do something about it after work. No promises, but that would make a pretty good blog post

I am resorting to pictures for this week’s Tired Tuesday post, but I went outside and took a few of my backyard.  My impetus for doing so is that the rhododendron is in full bloom and is lovely.  I was worried it would not last another day so wanted to take a picture.  Naturally I could not find the Tablet.  Steven and I searched almost all of the house except for the dining room chair it was sitting on.  Eventually I found it and was thankful it had not started raining again by that time. 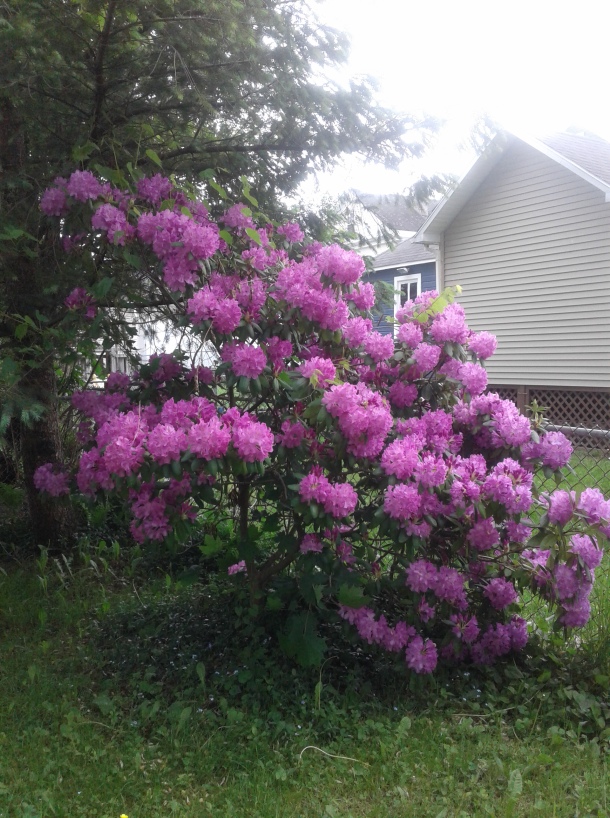 The bush gets bigger every year and has since a few years ago when I broke off a couple dead branches.  I suppose there’s a metaphor for life there, but I really do not feel like figuring out what to prune off myself for improvement.  Having captured this picture, I moved on and snapped a few more shots.

That’s the neighbors’ pool and house in the background.

My mom gave me the Rose of Sharon in 2011.  After Steven accidentally mowed it down a couple of times, it started to grow bigger.  I’ll have to take another picture after it blooms.  If it ever does.  And speaking of wait till it blooms, here are a couple more shots of plants that are going to look better later. 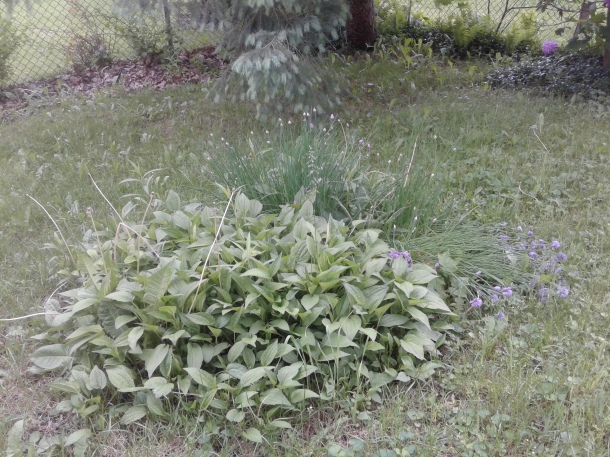 I suppose I could have pulled some of the weeds first.

I got the Black-Eyed Susans from a sale at the Herkimer County Humane Society back in 2011.  The chives are, I think, from Tripple’s Produce in Schuyler, NY.  They were in my container garden some years ago (I forget when but prior to 2011).  After the season, I put them in the garden to see what would happen.  Woo-hoo, they grew! (Hey, that might be a good title for this post.)

Ooh, even more weeds over here.

The irises are from my Mom.  She’s had irises in her yard for as long as I can remember.  Periodically she thins out the bulbs.  This is the first time I had a yard to put any in.  There are more very year, so woo-hoo once again. 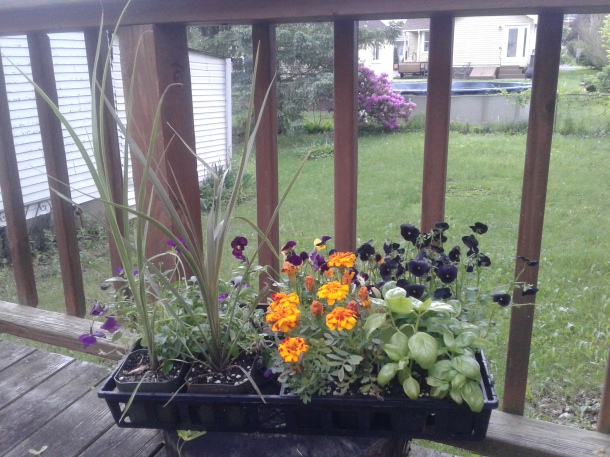 You can just about see all the other stuff in the background.

This last shot is another preview of coming attractions.  These are the plants I purchased at T & J’s Fruits and Vegetables in Herkimer on Sunday.  They will eventually be part of my container garden. I hope to share some pictures of that eventually.  When I’m not too tired to put them in the containers.  Happy Tuesday, everyone.

I wonder if I should make Nosferatu the mascot of this blog.  This evening, not wanting to do another Running Commentary  and having no other blog post anywhere in my brain, I went out into my yard and took some pictures on my tablet.  I used the tablet to transfer the pictures to my blog then went to the laptop to add the words (hoping I could think of some).  And look what the first picture was:

Isn’t he charming? I must have tapped the picture by accident.

Being less than computer literate can add interest to one’s life, I find.  Getting back to the pictures I intended to use,  here are some tulips in our front yard: 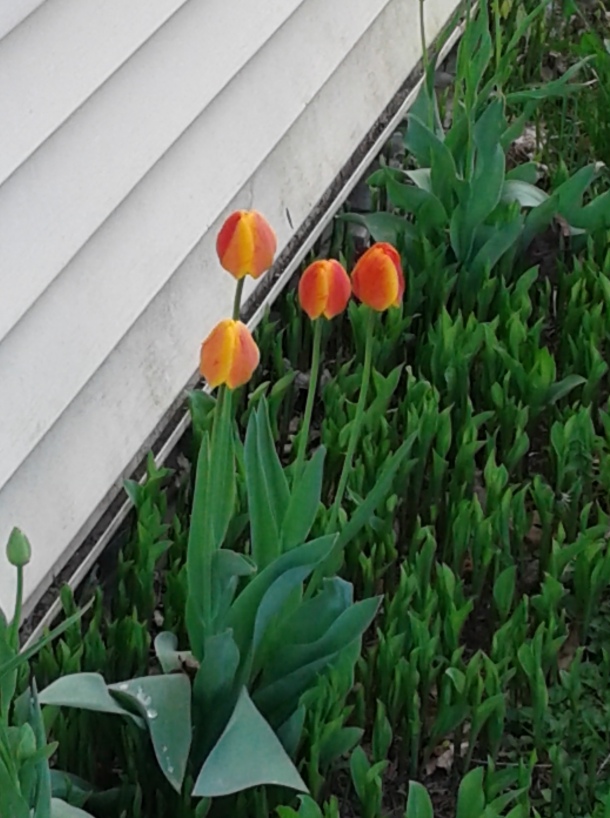 They are surrounded by lilies of the valley, which has not bloomed yet.

We did not plant any tulips, but the first spring we were in this house, one yellow tulip sprouted.  Yay!  It has taken some years, but now we are getting several.  The picture doesn’t show it, but there are more buds which have not bloomed yet.

What our front yard had in abundance at first were wild orange day lilies.  The stems were long and didn’t have any leaves on them.  I thought they looked blowsy.  Steven kept mowing them down and eventually they got discouraged.  That was when a single shoot of peony came up.  That has multiplied in succeeding years as well.  Here is a photo of the peony bush so far:

Moving into the backyard, I took a picture of a lovely plant we purchased at a Garden Festival at the Herkimer Home in Little Falls.  I forget what it is called.

I like that the greenery is so pretty even without the flowers.

It has grown and spread since the first year, which I do not mind a bit.  In fact, a little piece of it magically appeared further back in the yard, near my chives:

Yeah, there’s a dandelion, too, but I don’t dare pull it up, because I read somewhere that dandelions are good for bees.

So this is my yard before I have done any work in it.  Since I led with Max Schreck, I wish I could say it looked a little scary, but I think it is actually kind of nice.  I hope to post more pictures as it starts to look even better.  As always, I hope you’ll stay tuned.