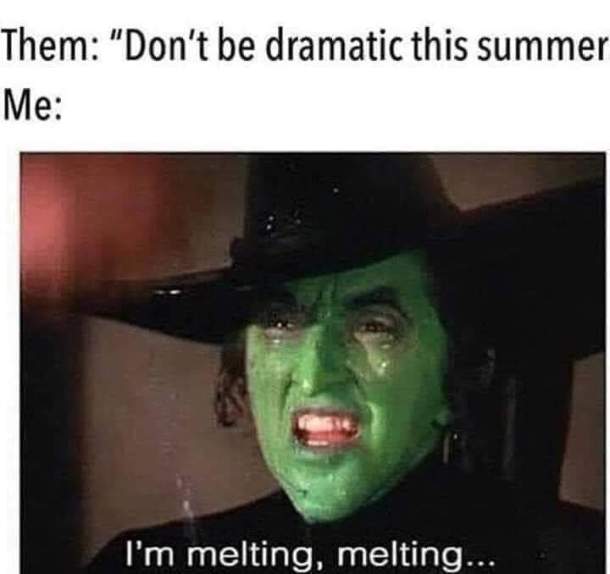 And yet, I am gaining weight. Go figure.

I will try not to spend this entire post whining about the heat and humidity, but no promises.  Sharing the above picture reminded me of a high school friend who used to quote Shakespeare referring to her midsection: “Oh that this too, too solid flesh would melt, thaw and resolve itself to dew.”  Is there a problem with spending an entire post lamenting my weight gain worries?

The beauty part is that today is Lame Post Friday,  so I am going to call whatever I come up with OK, as long as it runs to 200 words.  Maybe another picture would pep things up.

I think they are pretty.

I have been watering my Johnny Jump-ups and my container garden almost every day.  The forecast keeps promising rain and even thunder storms, but they seem to bypass me.  I keep thinking I should take an updated picture but have not done it yet.  And no, I can’t run out and do it now, because it is dark out.

Speaking of dark, I will be glad when we start to get a little more of it.  I’m sure that is an unpopular opinion, but I usually am out of step with the rest of the world (you may have noticed).  Mostly I am looking forward to a later sunrise.  That way, when I go running in the morning, I can begin my run in the dark and end it in the light.  I love that.

Ooh, look, I am over 250 words.  I think I will just close with a picture.  Happy Friday, everyone! 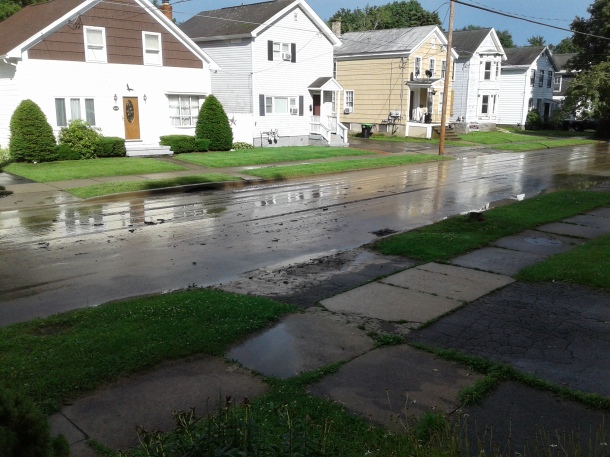 A shot of my neighborhood being rained on, because I hear it starting to rain as I type this.

Staying in Some Sort of Shape

In my defense, I have not made a late post at four in the morning in a while (OK, 4:16, according to my laptop, if you want to be didactic) (you know who you are) (and yes, I am on my laptop, ten-finger typing.  It’s fun!).  On the other hand, as regular readers know, I am too lazy (or maybe too impatient; is that better? Discuss amongst yourselves) to go back and check these things, so my defense may be a whole lot of hooey.  I can’t worry about these things now.

I felt too sick to my stomach to make a blog post last night.  I expect I ate too much at supper.  It is a sad reflection on me when I am gaining my holiday weight through a mere week-day supper of leftovers.  But it was quite tasty.  Perhaps the run I took helped burn a few calories, but the fit of my pants this morning (and I specifically washed the fat old lady pants for just such an emergency!) would refute that forlorn hope.

Yes, I took a run and fully intended to make a Running Commentary post.  The weather in Mohawk Valley is veering between bi-polar and “Go home, December, you’re drunk.”  I can’t quite remember Monday (I’m having that sort of a week, in case you couldn’t guess), but Tuesday had some relatively high temperatures: 40’s and 50’s, but was supposed to get colder in the evening.  It had rained during the day, encouraging snow melt, so I was a little concerned that it would turn to ice right about the time I wanted to run.

However, I set out around 3:30 p.m., having paused only to put on running gear and throw a load of laundry into the washer (regular readers may recall that is one of my few instances of multitasking).  I wore leggings (nylon long johns which I often wear in lieu of pantyhose, to be exact), my long-sleeved ARMY t-shirt, and a knitted headband.  It was a little warmer, after all.  No need for hat and mittens!

As I have often observed, running after an eight-hour work day is a far different activity from running after a good night’s sleep on the weekend.  Still, one must persevere.  For the main reason, the Reindeer Run 5K is THIS SATURDAY!!!  I felt prepared this past weekend.  I felt distinctly less so yesterday.  You’ll have that, I told myself (one of my favorite phrases of self-encouragement), and, well, persevered.

And it was not that bad of a run.  Some of the sidewalks were bare-ish, but I mostly stuck to the road.  My experiments with running on the sidewalk did not lead to disaster, but my feet definitely did not feel as secure.  I kept to the less busy residential roads but of course could not avoid all traffic. Parked cars were an especial annoyance, but after all, people have to park somewhere.  I hope I am not unreasonable.  I kept left side facing traffic, and stayed over as far as I could without running in deep puddles.

I ended up going for 26 minutes.  I hope that is good enough for maintaining my 5K shape for a few more days (let us not further discuss my actual shape!).  Tonight we have shopping and dinner plans, but I hope to run Thursday and PERHAPS another short run Friday.  And a pasta dinner.  That is my favorite part of a race: carbing up the night before!

Late, Lame, but Not Lean

Yesterday I took a real Blogger’s Sick Day.  Judge me if you like, but one can only do so many things when one has a migraine.  Determination will only take you so far.  I was going to say “discipline,” but we all know I am notoriously undisciplined, while nobody refutes that I have a marvelously thick skull.  Maybe that’s my problem with all the headaches.

Just to throw this in there:  I AM doing something about the headaches.  I shall not elaborate on what, because, you know, HIPAA and all that.

Last night I felt incapable of even Lame Post Friday. How unlike me.  It was the last day of work before what I will call Christmas shut-down. I rather thought more people would be feeling more giddy, myself included.  I knew I should have brought cookies.  There is nothing like home-baked cookies to spread the Christmas spirit, as well as to add to the hip-spread of people who really need no help in that direction, myself included.

Yes, I have been sadly aware that this is a HUGE time of year for getting, well, huge.  I knew it was coming; the calendar is remarkably predictable each year, and I have been around quite a number of years.  So did I prepare by dropping a few pounds ahead of time (yes, I KNOW yo-yo dieting is a terrible thing; I’m only talking about five pounds, is that such a problem?)?  Of course not!  I’m still trying to drop the few pounds I put on last Christmas!

So this is my Friday Lame Post:  a late lament about my weight.  I believe that is sufficiently lame, yet universal enough that I hope some people are at least mildly entertained.  For those of you who are not so plagued by those pounds (either by not putting them on or not caring if you do), you may bask in the glow of superiority.   We’ll call that just another service I provide.

So this is the third time I’ve put pen to paper attempting to write my blog post ahead of the time I type it into the computer.  I still don’t have a clue what to write.  I suppose it is still All Leading Ladies All The Time, but I think I’d rather talk about me.

As director, one of my jobs is to give the curtain speech before each performance.  I welcome everybody, tell where the fire exits are and introduce the show.  It is a classy touch for the director to dress nicely for this.  Oh dear.

I know I have spent many blog posts on my wardrobe ills.  When dressing for anything other than work, I struggle over What To Wear.  What fits this week?  What would look good?  How is the weather going to behave?  Will I be over- or under-dressed (regarding style OR weather)?  I know some people do not agonize over these decisions and, oh, how I envy them.  Then again, do they ever have the utter satisfaction of finding the perfect outfit after great effort?  Oh, they probably have it more often and without effort.  I can’t worry about other people!

With opening night just over a week away, my concerns are coming to a head.  When the production was just a blip on the horizon, I had big plans to become small. You see, there is this little purple dress I purchased in 2011 and have never worn.  Wouldn’t it be delightful to give my opening night speech looking all hot and awesome in a little purple dress?

I have not tried on said dress so have no idea how far off I may be.  However, I am trying to take off weight.  Having no time for  exercise (I know, that makes me TOO busy), I have been concentrating on eating less.  I’ve heard where eating less without exercise will lose you more weight than exercise without eating less.  I must say, I find exercise more fun.  I mean, I like fruit, I like salad, but…

There, I’ve said it.  That was as far as I wrote earlier today on my lunch hour.  Now I am frantically typing prior to hurrying to rehearsal.  I did not eat the potato chips.  Yay me.

Can’t Write After That Run

I know, I should have had Saturday Running Commentary today. After all, I’ve been blathering on and on about the DARE 5K and it was run, wait for it, this morning. I was even thinking as I ran what a great post it was going to make. Well, it isn’t going to make one today.

I have a party to go to. Oh don’t start in with the, “What’s more important, a party or your writing?” What’s important right now is that I don’t have time to take a nap. I tried, oh I tried not to run too fast too soon. I tried not to push myself too hard and give myself an VCD attack. In fact, it wasn’t that bad of an attack. When I stopped running I was making some fairly horrible noises breathing, but nobody got too worried about it and I stopped fairly quickly. So there.

But I’m TIRED. I got up early, and I was tense about the race. I had butterflies in my stomach and in my chest. I was NERVOUS! What was that all about? I do this race for FUN. And it was fun. A lot of fun. But now I’m tired. I have a headache. And I have a lot to get done before I drive three hours or so to a party. Which I hope will also be fun.

I am progressing on my list of things to get done. However, I am leaving the most onerous chore for last. I have to figure out what to wear. You know, I have gained weight and it seems to be settling in my belly. When I was getting changed to go to a wine tasting last night (ooh, that would have made a good post for today), the first outfit I tried made me look like I had a baby bump. A baby bump! At my age! How dreadfully unbecoming.

So this post about Why I Can’t POSSIBLY Write a Post Today is getting progressively longer, because I am putting off that dreadful moment when I start trying on clothes, looking at myself in the mirror and crying. Good thing I’ve been re-hydrating ever since the run.

Hope to see you all on Wrist to Forehead Sunday.