I took a short (very slow) run, thinking I might make a Running Commentary Post. Then I came up with something better. In lieu of my cool-down walk (I just love that expression “in lieu of”), I mowed the front lawn with my non-power mower and pulled up a few weeds and unwanted items.

In the course of doing this, I noticed I have a Johnny Jump-up! It is only one little bloom, but I was delighted to see it. I immediately decided to take a picture, although I finished my mowing and pulling first.

These are tulips, which is very exciting for me, because we have not had this many previously. We usually get one and feel happy with that, because we did not plant it.

I was not sure if this was a flower or a weed, so I let it live. Does anybody know what it is?

I spent a little time pulling up green stuff surrounding my peonies. I believe I sacrificed some daisies, but I also believe we have plenty of daisies. Last year something ate my peonies before they bloomed, or somebody came and took them all away. I hope for fragrant blossoms this year.

I did not do a whole lot, but I thought it was not too bad for after a run on a Tired Tuesday. No doubt I will share more pictures as the season progresses.

I did not do anything bloggable today.  I went for a short run this morning, during which my legs said, “What’s up with this?  We didn’t sign up for this!” and my breathing went, well, “puff, pant, puff.”  I went shopping for a couple of things, but not to the locally owned, distinctive stores I love (sorry, folks, sometimes I need mass produced items).  My only real accomplishments were a load of laundry and two letters.  And I fear they were short, illegible, and uninteresting.

Oh dear, now it seems I am making a whiny blog post.  Let me share one of the pictures I took this afternoon.

This may be a metaphor for my life.

This is my driveway and front walk.  I have been meaning to do something about all these weeds.  I mean something other than staring at them and shaking my head.  Yesterday, I looked up (for the second or third time), a natural spray for them and mixed up a batch. 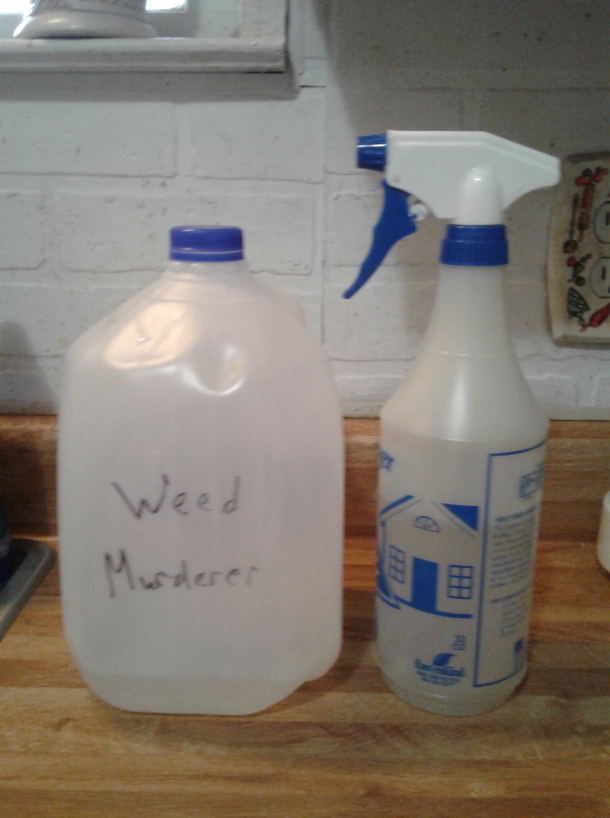 It has vinegar, salt, and dish soap.

Which were soon dashed.  I am not sure if my weed mixture did anything at all, but it certainly was not the miracle I was hoping for.  I poked and pulled and huffed and puffed.  Soon sweat was pouring down my face and my back was aching.  I bent over, I squatted, I sat, I knelt.  I had to laugh at myself.  What a crazy old lady I must have looked like!

I persevered for a half hour, maybe a little more.  I got a lot of dirt on myself and made some amount of visible progress.  However, I did not take a picture.  Oh, OK, I will go out and take a picture now (ooh, look at me, blogging in real time).

It’s a work in progress.

You can see why I did not list this among my accomplishments for the day, especially when I mention there are a lot more cracks with weeds.  Still, I gave it a shot.  People who took care of the weeds in their walks earlier in the season, I congratulate you.  I am hoping to do better next year.  In the meantime, I hope this will do for my Tired Tuesday Post.

Me vs. the Yard

Anybody who is anxiously awaiting the return of Saturday Running Commentary (I am), keep waiting. It’ll get here. This week, I went to Curves and exercised instead. When I got home, I thought I wouldn’t waste the sweat but do some work in the yard.

Lots of stuff has been growing up around the garage, none of it pretty. Oh, we had some pretty things there earlier this year. Some lovely irises, some pink flowers whose name I never knew, some chives and parsley (maybe not exactly pretty, but yum).

Now it is overgrown with weeds, and some of them are getting quite tall and unsightly. I like to blame the inordinate amount of rain earlier this summer rather than my lack of diligence at weeding, but really, does pointing fingers get us anywhere in this situation? In fact, you don’t even need to point your fingers at the weeds I ought to be pulling up. I can see them perfectly well.

I started in back of the garage. Yikes! I rarely see in back of the garage. I like to sit on my deck, where that part is nicely hidden. Today I was confronted with a huge bush/tree/something. It comprised several different plants, I think, some of them with some nasty stickers. I was armed with gardening gloves and clippers. I strode bravely into the fray.

And was soon saying, “Ow! Ow! Dammit!” Those gardening gloves are not exactly impenetrable. And they only cover up to my wrists. It is not long sleeve weather. I did not get very far on what I now think of as the Monster of the Back Yard. For one thing, the sun had moved around and you know how sensitive I am about direct sunlight (at least, I suppose new readers, if any, don’t know, but I am).

I moved to the side of the garage, the unsightly part we see when we are sitting on the deck. The worst of the weeds were among the irises. Now done blooming, and even the greenery didn’t look too healthy. I figured it would be OK to cut or pull the green stuff as long as I left the bulbs in the ground. After much huffing and puffing, I accomplished it. I left the most of the greenery from the unknown pink flowers. It still looked pretty good, and I managed to get most of the weeds around it.

Moving on up, I came to a place where last fall Steven had planted some flowers from my container garden on the deck. We thought we’d see what happened, not being clear on if they were annuals or perennials. Some stuff had grown. It had not bloomed, so I had begun to suspect that they were not flowers. I began to pull them up as ruthlessly as I could manage (not being a particularly ruthless person).

And noticed a pleasing aroma, even penetrating my screwy sinuses. I sniffed closer. Why, yes, that was mint! I forgot I had put some mint there. The ground had been hard, it hadn’t been such a much when I planted it, well, I’ll be a ding dong daddy, as my grandmother used to say. They say mint will take over your yard. I say, have at it! I plucked some mint and brought it inside. Later I will make some mint tea. Aaaahhhh!

And that is my gardening story for the day.