Tired But Running And Posting

I just sat at my laptop and typed in 444 words of a blog post.  There are more words to be written, but I could not write them today.  Judge me if you are so inclined.  I am having a Tired Tuesday.

This is me tired.

I do not look like this right now, at least not the hair-do or outfit.  It is me after I ran a Virtual 5K to benefit the Little Falls Food Pantry.  I must have written a blog post about it, since the picture is in my Media Library.   My facial expression might be similar, because I am still recovering from running my Virtual Boilermaker 15K on Sunday.  That is what the 444 words were about. 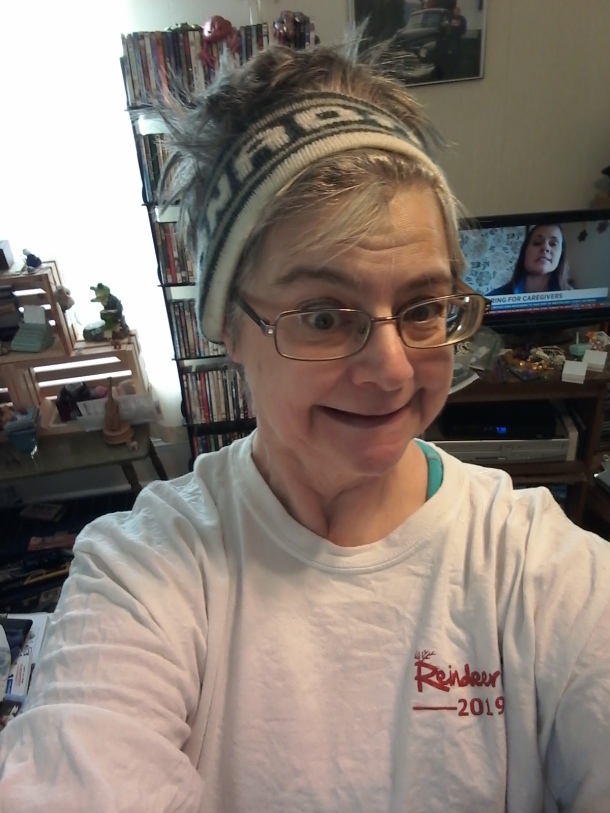 This is me all bright-eyed and bushy-tailed before the run.

Is “bright-eyed and bushy-tailed”  a cliche or an acceptable idiom?  Or is it a retro expression which adds color to the post?  I fear it is the least flattering option.

I went running this afternoon, thus making a traditional Running Commentary Post a possibility.  My main comment is that my legs felt pretty awful to begin with and pretty terrific at the end.  I like to remember these things, because it is motivation to keep running!

In the meantime,  I shall continue to work on the post about my 15K.  Additionally,  I still hope to run the Mini- Maker at Copper City Brewing in Rome on Sunday Sept. 13.  As always, I hope you’ll stay tuned.

This is not going to be much of a Saturday Post, but I hope to do better than last week, when I missed Saturday entirely.  I am pretty much ignoring a DVR’d episode of Mystery Science Theatre 3000 as I type this (one letter at a tome with the stylus, of course).  No loss on my part? I wonder.

There.  I stopped that and put on a Snapped On Demand. “They were a power couple…”   I just can’t get enough murder and mayhem.

But about my Saturday, I have not done much.  I went for a run.  I was enjoying shorter runs since they cancelled the Utica Boilermaker this year.  However, yesterday I quite abruptly and unexpectedly decided to participate in the virtual race.

My original response to the cancellation of the race was, to heck with it, I’ll just run it next year.  I thought, “I can’t run 15K without all the hoopla cheering me on!”  Then I thought, this will be a challenge.  Let’s do this!

It may have been a good idea to do a Saturday Running Commentary Post and cover all this information.  However, I feel largely disinclined toward any such effort.  It is that sort of a Saturday.

So here is my post, and it raises a question often considered in this blog:  Is a lame post better than no post at all?  Discuss amongst yourselves.