Running Commentary, One Letter at a Time

Well, this is just swell.  I can’t get on WordPress on my laptop .  What’s that all about?  So here I sit on my Tablet  typing one letter at a time with the stylus,  occasionally benefiting from the anticipatory thingy.I really do not like posting this way.  Then again,  I meant to make a Running  Commentary post.  For once I am typing as slow as I run.  It! Could! Work!

Once again I did not want to run today.  I also felt that I did NOT want to run the Reindeer Run 5K in Little Falls Dec 8.  The run is part of the Christmas in Little Falls festivities,  which I similarly felt not in the mood for.  What’s that all about, me?  Finally I said to myself, “Just try.”

I put plastic bags over my socks inside my sneakers,  because it was quite wet and slushy.  As it turned out, I did not run through much wet.  I stayed in the road (left side, facing traffic, which is the right way to do it), which is not my favorite way to run.

Once I got started, my body didn’t feel too bad about moving.  I had promised myself I wouldn’t have to run more than 20 minutes.  Just a short run to keep my feet in (You know, like keeping one’s hand in, only it’s feet, because I’m running), in case I decide to run the Reindeer Run 5K after all.

As you may have guessed,  I am now leaning SLIGHTLY in the direction of running.  I’ll let you know.  And I’ll make a longer blog post, after I get my real keyboard back.  In the meantime , we’ll call this a Wuss-out Wednesday and drive on.

I’m standing in my kitchen,  trying to cook supper and type into my Tablet at the same time. I am not very handy at this one letter at a time typing.  And the Tablet’s little guesses of what I’m about to type is not as helpful as one would expect.

OK, supper is over.  I had thought I could take a few pictures of the work in progress and mock up a cooking post.  I went running earlier, thinking to do a Running Commentary post.  I soon realized I was far too tired for such a thing.  That happens sometimes on these mid-week runs.  But I did want to start cooking supper before Steven got home, so I thought, “Hey!”

So the above picture is the half onion I chopped and put on to cook in oil (I previously used the other half for another meal).  Unfortunately it blacked before it browned, but you’ll have that.  I had a couple of pork chops I planned to put in once the onions were far enough along.  Should I take a picture of the pork chops?  That looked boring.  I had some garlic dip I made yesterday, which I planned to use making garlic mashed potatoes.  Maybe that would pep things up.  Then I threw in the bottles of wine we got at the wine tasting at Valley Wine and Liquor on Friday, and came up with this.

You can see the Mohawk Valley Fire moonshine from DikinDurt Distillery of Herkimer.

Full disclosure:  I did not cook with wine, unless you count the fact that the bottles were on the counter nearby.  I did not put it in the food, I did not sip while I stirred.  I hope that does not disappoint my fellow oenophiles (I pronounce it oh-nee-oh-file).

I wanted a third picture but could not at first think what to shoot.  I did not want to wait until supper was ready and take a picture of that.  My original plan was to finish this whole post before that, but, what a surprise, my plan did not work out.  Why do I even make them?  Finally I thought I would just go ahead and show how cluttered and unorganized my kitchen is, echoing no doubt the cluttered and unorganized state of my mind. 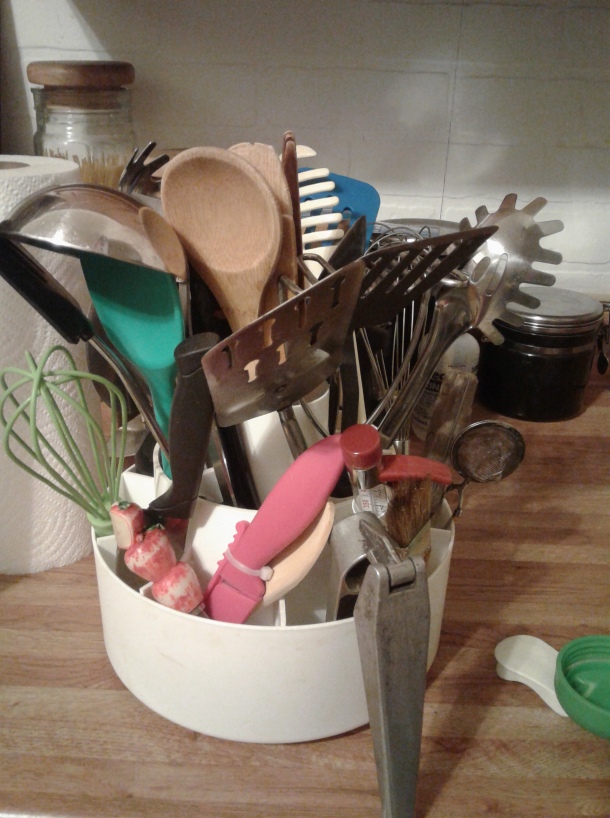 Note the garlic press. I use that a lot.

Supper turned out pretty good.  I put a can of cream of mushroom soup and a can of mushroom pieces and stems in with the onions and pork chops.  I mashed the potatoes with a big spoonful of the garlic dip.  That was after a run and doing a load of laundry (which I did not mention before, but I did).   And now I’ve made my blog post.  I say I’m doing OK for a Monday.

I promised you a pretty post in the near future , and here it is.  Full disclosure (there’s no colon on this dumb Tablet!  Grrrrr!) I’m typing on Mt Tablet with the stylus.  It is not easy, but I will persevere.

This is Martha Canfield Library in Arlington, VT, which has saved my blogging bacon on several occasions.  Who knew you could just sit outside a library and get on the Internet, even when it isn’t open?  Oh, you probably knew.

Of course I prefer to be inside the library.  This is a really nice one, too.  I’ll have to take some inside pictures on a future visit.  In the meantime, here are the pictures I took outside. 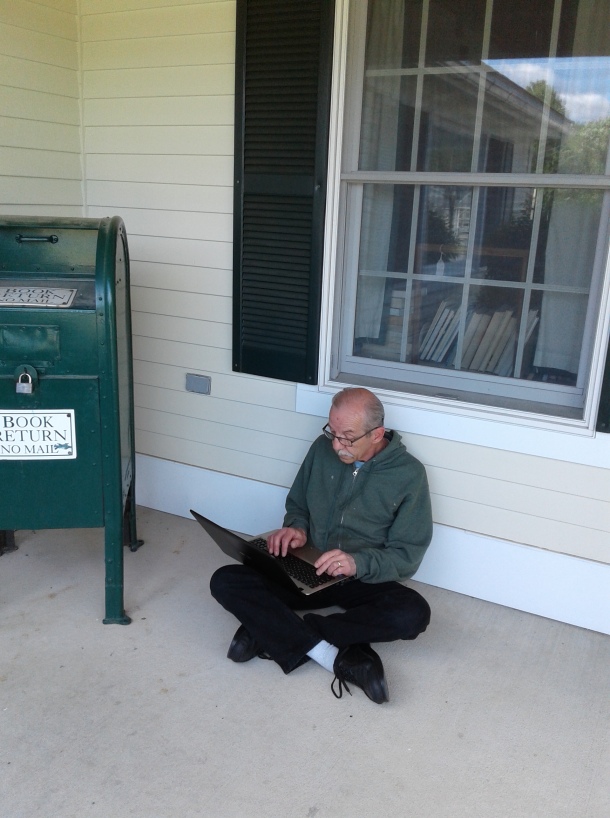 Naturally I wanted to get a shot of my husband, Steven.  We found this spot had the least glare.  It was quite a sunny day.

I don’t know who Jean Woodman is.

This is embarrassing.  I did not get any shots of the flowers, just the plaque.

Not surprisingly, I don’t know what mountain this is either.

When in Vermont, one sees plenty of mountains.  I guess I could have gotten a few more pictures of them.  In my defense, it is not easy taking pictures with a Tablet on a bright sunny day (cue jokes about how the day was bright but I wasn’t).

One last note (again with the no colon!) I have succeeded in typing in this entire post on my Tablet with the stylus.  Once again, I triumph.

And explanation of that first sentence.   I was about to write a complete sentence then thought, “Oh hell, I’ll just make my blog post later.”  I didn’t realize WordPress had saved it till I logged back in and saw I had an untitled draft.  Naturally I clicked Edit.  At first it looked as if WordPress had saved a blank screen, and I said, “How appropriate.”   Then the above sentence fragment appeared, and I kind of liked it.

The second paragraph was composed on our tablet, you know, one letter at a time with the stylus, till the word I want appears above the keyboard.

Now I’m back on the laptop.  Aaahhhh…  I still don’t have anything to say, but it sure is a lot quicker to ramble on. The first sentence was going to be a reflection that Friday is different when it is the end of a vacation week.  Then I thought, well, duh. I have spent most of today reminding myself that this is still a three day weekend for me.  If I had worked all week and was at the beginning of a three day weekend, I’d be pretty damn happy, wouldn’t I?  Well, then.

So  I am reasonably content with my lot in life tonight.  Three more days till I return to the beastly grind, which, as I may have said, is not particularly beastly nor even grind-like.  I am actually feeling kind of zen about it.  I guess somebody who knows a lot about zen would tell me I am misusing the expression quite disgracefully. I did read a book about zen once:  Zen and the Art of Archery, I think it was, no idea who wrote it.  My cello teacher recommended it to me. She was kind of a weirdo, although I remember being quite impressed with her when I was a high school student.

What I mean by “feeling kind of zen” is, the first sentence sounds oddly appropriate to me.  Then again, perhaps the blank screen would have been better.  Discuss amongst yourselves.  I must get back to enjoying my three day weekend.