Something About a Cat…

I thought I could have a Sunday Cinema Post but am not sure if I am able to wax sufficiently eloquent about the movies I saw. I had originally considered a Sunday Running Commentary Post, because I took a good long run early this morning. Then, too, a Scattered Sunday Post might be eligible, because I also did yard work, worked around the house, went to visit family and took a long drive home.

All this by way of introduction to one of my usual Wrist to Forehead Sunday Posts. It has not been a bad day at all, but when I think of all the things I have not accomplished this weekend, I am inclined to swoon.

Then again, what is so wrong about enjoying the weekend and not being super productive? I feel sure Svengoolie would approve, especially since I spent part of today watching DVR’d episodes of his show.

The first Svengoolie we watched was Mystery of the Wax Museum, the precursor to the Vincent Price classic House of Wax. I know very little about the more recent remake, nor do I care to.

The second Svengoolie we chose was Shadow of the Cat. I remembered the title just now. It had slipped my mind earlier, hence the title of this blog post. I will let that title stand, however, because I like it.

I got all excited when I heard it was a Hammer Horror. Alas, it featured neither Peter Cushing nor Christopher Lee. It was not a bad flick, but it was not the thrill I was hoping for. Perhaps I was too tired to invest the necessary attention.

I enjoyed more the DVR’d episode of Dateline we watched next. Keith Morrison is fine, yes.

So I reach the end of my Sunday feeling happy enough, because I am not putting my blog post off till tomorrow morning. I put tomorrow’s lunch together as well. I am going to call that a win and worry about all the stuff I did not accomplish later. Perhaps I will not worry about it at all but strive to accomplish all in time. As always, I will keep you posted (see what I did there?).

Oh crap!  I waited too long in the day to make my Wrist to Forehead Sunday post, and I got nuthin’.

I could have done  Sunday Running Commentary,  although my run was neither long nor noteworthy.  I could perhaps do a Sunday Cinema post, but I have not illustrations for the movies seen, and I lack the ambition to find them.

I worked on our back yard for a while.  I did not take any pictures,  because, quite frankly, the yard is still not looking very good.

So we are left with yet another post lamenting my ability to make a decent blog post.  Can I at least share a silly picture for your amusement? 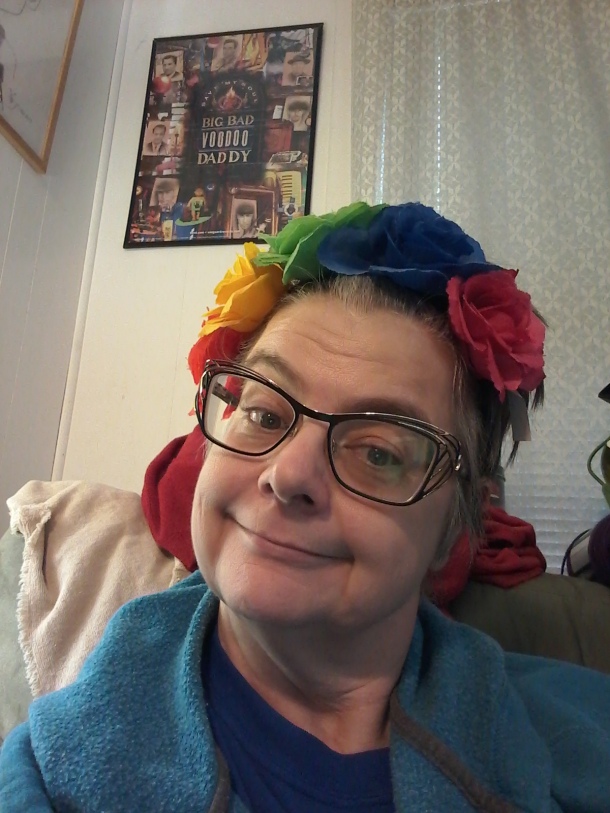 Am I pretty? Don’t answer that question.

I got myself a new headband at the dollar store while purchasing more essential supplies.  It broke today.  That was rather a disappointing development.

It has not on the whole been a disappointing day, however.  After working in the yard, my husband Steven and I sat on the front porch for a while. I have been wanting to do some porch sitting, but the weather has not cooperated.  I relished our outdoor time today.

So this how my days go: some disappointment,  something to relish, not a whole lot to blog about. What can I say?  We do what we can. Happy Sunday, folks.

So I registered for the Boilermaker 15K.  And then I went running.  Not immediately, but soon enough.

OK, I think it is fate that I use the above sentence.  You see, earlier I typed it in, then erased it, then decided I would make my post later so exited out of WordPress.  The computer asked me did I really want to leave, as what I did might not be saved.  I looked at the blank space and hit “Leave.”  Now, returning to WordPress and wondering what I will say, I see an untitled draft saved from earlier.  It is the sentence I erased!

Could it be returning to haunt me?

The question is not an idle one.  I have been in I guess what you could call a spooky space lately.  I shared pictures of Nosferatu a couple of days ago, yesterday I wore a spider earring and Halloween socks, I am currently sipping Malbec out of my Trick Or Treat wine glass (purchased at Pumpkin Junction in Sauquoit, NY) (and, yes, I did flash on Bela Lugosi as Dracula saying, “I never drink… wine”).  OK, so now I have my headline.

There really wasn’t much to my Scattered Saturday this week.  I worked. While working, I dithered some more about whether or not to run the Boilermaker 15K (the 5K isn’t even on my radar, by the way).  I decided to run it.  Then came home and changed my mind.  Several times. And you see by my lead what my ultimate decision was.  Yes, yes, I could still opt out, transfer my registration or get a deferment (because, you know, shit happens), but I feel fairly confident that I will follow through on this.

I had meant to write a Saturday Running Commentary about my run, but such a post was not forthcoming from my brain.  It is not a well-trained brain.

I have not done much else today.  I am currently cooking supper for my dearest husband, Steven.  Perhaps a cooking post tomorrow, instead of Wrist to Forehead Sunday.  Or maybe Sunday Running Commentary?  A little uncertainty will add interest to my weekend.  Happy Saturday, everyone.

Off to a Running Start on Sunday

It’s Sunday Running Commentary!  When I got up this morning (at a leisurely but not as late as I would have liked) 6 a.m., I said, “It would be a good idea if I went running.”  I was bearing in mind a recent note to self: do not go three days without running.  It had been two.  Regular readers may recall that it is a trick I use to get myself to do what is good for me:  I say, “It would be a good idea if…” as opposed to, “I should…”  Sometimes it works.  Today it did.

I wore my ARMY t-shirt with the reflective doo-dah on the back, because it seemed the sun was not quite up.  By the time I had wrestled myself into two sports bras (do NOT tell me, “TMI!”), it was not as dark as it had seemed, but a bit of reflective stuff is not a bad idea on a run.  Off I went.

As I reached the end of the driveway I saw the most beautiful sky.  The rising sun was making a lovely pink texture on the bottom sides of lots of clouds.  It was to the left of me as I ran towards German Street.  I wondered if it was a red sky at morning (sailors take warning). I pondered, as I have since I first heard that expression, if there was a qualitative difference between red skies and pink skies.  And how about orange skies?  Anyways, I’m not a sailor, so I have never been too exercised over the whole idea.

I turned left onto German, so I could enjoy the sky.  I saw our paper deliverers across the road and waved at them.  Our paper deliverers are awesome.  So prompt and reliable, and they seem to have a vast territory.  My plan was to run up Main Street, down the path over what used to be a hydraulic canal (does that path have a name?) then on to the end of German, via a street that runs parallel, and back down German, going up and down the dead end streets.  It is what I think of as my Sunday Dead End Run.  As my run time increases, I can add more dead end streets.  My run time is back down (I’ve had a bad summer, running-wise), so I wondered how few dead ends I would make today.

As it turned out, very few.  OK, just one. And I suffered an injury. Not much of one.  As I approached the end of the street that ends near the parking lot of the HARC building (another dead end but not one that forces me to turn around, so ah ha ha), I ran around a car parked across the sidewalk.  I thought to get back on the sidewalk for the little bit of it that was left, then I tripped on the curb and went down.  Damn!  How clumsy of me.  I scraped my knee but did not pause to check how badly.  It didn’t feel too bad.  I had landed on one hand too but thought I had done even less damage there.  Mostly some gravel.  This was fine. I would be bad ass enough not to worry about it (although I planned to mention it in my blog post).

It was not, however, a particularly bad ass run.  I was ready for the cool shower portion of my day well before I stopped running.  I enjoyed it, despite being sweaty, tired and (slightly) injured. I like looking at people’s houses, envying features like screened-in porches and wondering if I can imitate certain garden features.  For example, I saw a chair with a potted plant sitting underneath the space where the seat was missing, vines climbing up the chair back.  Do I have a broken old chair I can use that way? Maybe I could find one at a garage sale.  I saw a very long clothesline.  My clothesline is not nearly that long but I like it.  Is it supposed to rain today?  My bunions are non-committal.

I ended up running 30 minutes.  My goal had been 28, approximately ten percent over the 25 minutes I ran last Sunday.  I felt pretty pleased about it.  I feel pretty pleased that I have made my blog post prior to 8 a.m.  What other ambitious things can I get done today?  The sky’s the limit!  Incidentally, it stopped being pink soon into my run.  I think I’ll check and see if it’s grey.