Tag Archives: Strangers on a Train

My Blogger’s Sick Day continues.  I helped Steven get our deck cleared off and I even raked some leaves in our front yard, uncovering the peonies, which I cut back to hopefully encourage them to come back next spring.

Other than that, I gave lounged on the couch saying, “Shit! Why do I still feel so crapoy?”  I intend to make a doctor appointment tomorrow, not that I feel much confidence in that.  Never mind, I need to make a blog post right now.

Watch out! It’s the pod people!

I was hoping to find a picture to, as I usually say, pep things up.  We are watching Invasion of the Body Snatchers.  I am not too ill to watch movies, as I was last night.

A shared drink, a look at a lighter…

I could not find another picture of Invasion,  nor yet of the other two movies we watched, but here is one of another good flick, Strangers on a Train.  I don’t imagine we will watch this one next, because it is not one of Steven’s favorites,  but we may watch it one day soon.

“Pleased to meet you… bitch!”

Ooh, here is a movie I did not even think of when Steven and I were trying to pick a black and white movie to watch next, Sudden Fear, with Joan Crawford,  Jack Palance, and Gloria Grahams.  But it is a thought for later!

I’m sure nobody expected me to get my act together overnight.  If you did, well, you realize you were setting yourself up for disappointment, do you not?  No matter.  We all have foolish expectations from time to time.

All this by way of introduction to another Monstrous Monday.  My only decision now is whether to use repeat monsters or search for new pictures to share.  I think I’ll look for old and try to think of new things to say about them.

Here’s a double bill I never thought of.

I do not remember why I downloaded this shot or when I used it.  Trog, for the uninitiated, is Joan Crawford’s last movie.  It is not my favorite cheesy horror movie featuring Crawford.  And before anybody hazards a guess, neither is Whatever Happened to Baby Jane.  I don’t think I have ever seen Taste the Blood of Dracula, although I have seen a few Hammer Dracula movies starring Christopher Lee.  I understand he kept saying each one was his last, but the studio would talk him into the next, often by pointing out how many people would get work thereby.  If that is true, it gives me quite a good opinion of Lee, even outside of his acting prowess.

“Did you think I would not pop in?”

What’s a Monstrous Monday without my favorite guy, Nosferatu?

He only looks harmless.

I end with a monster of the human variety, Robert Walker as Bruno in Strangers on a Train, on the right.  The other guy, looking a little apprehensive (and no idea yet how right he is to be so!) is Farley Granger as Guy Haines.  Good movie.  I’ll have to give it another watch soon.  But not on a double bill with Trog.

So it’s not going to be All Boilermaker All The Time after all.  I am indulging in Non-Sequitur Thursday complete with pictures.  First a little cheesecake for the discerning viewer (you know who you are):

So how come John Gavin is so small?

We decided to watch Psycho, which we have on DVD.  I think it starts a little slowly, but Janet Leigh does spend the first scene in a bra and half-slip.  Some folks enjoy that sort of thing.  Here is a more atmospheric shot for a little less prurient interest:

I love the sky.

After Psycho, I suggested we continue the Alfred Hitchcock theme with Stranger on a Train.  I recently acquired that DVD at a yard sale. Score!  I would like to see again the remake, Throw Mama From the Train.  I love that Danny DeVito.

Ah, the fateful cigarette lighter. There was a lot more smoking in the movies in those days.

I would have liked to get a picture of the carousel, a more dramatic setting than the titular train, but I could not find one.  Full disclosure:  I didn’t look very hard.  Regular readers may notice that I am downloading pictures again.   I still cannot download them on my own Facebook page.  However I can download them from my husband Steven’s page.  So I am sneakily logged onto his site.  Don’t worry, I won’t cause any more mischief while I’m there. 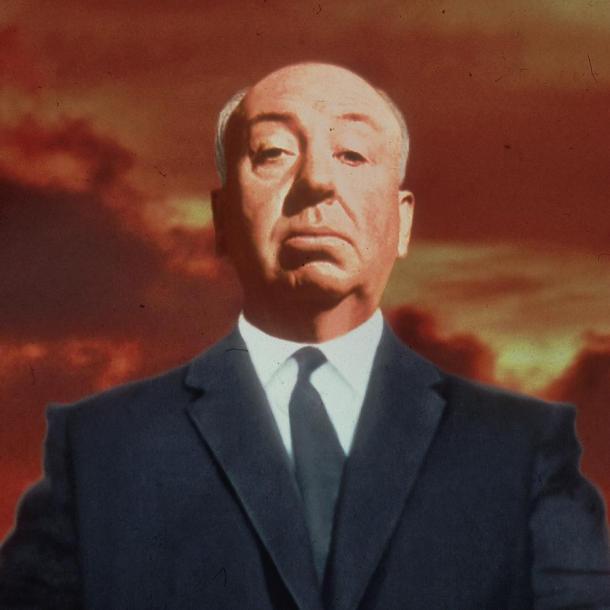 I close with a picture of the master himself, Alfred Hitchcock.  We could have continued our movie viewing with Rear Window, The Birds, Rope, North by Northwest, The Lady Vanishes, The 39 Steps, or To Catch a Thief.  I guess we have quite a Hitchcock collection (no, no Vertigo!  I may lose all cinemaphile cred by saying this, but that movie has always left me cold).  And I thought of a good title while I was typing this.  Happy Thursday, everyone.