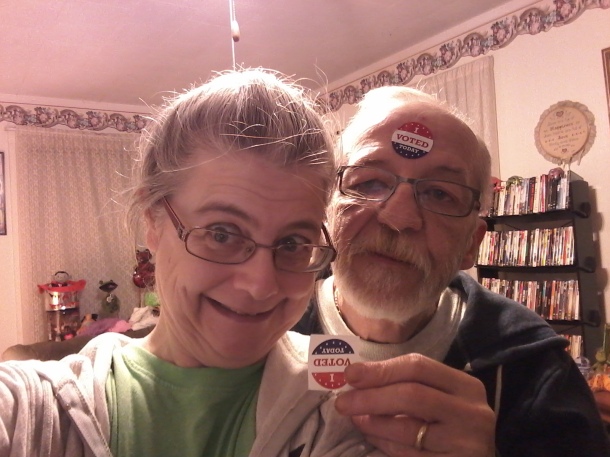 Well, that photo didn’t turn out as well as I thought it would.

So we voted, and my dear husband Steven insisted we take a selfie to commemorate the event.  In fact, we vote in most elections, presidential and otherwise.  Just as an aside, boy do I look old in that picture!

After we voted, we rewarded ourselves with dinner at PK’s Pub in Herkimer, NY (where we live).  It was quite the yummy dinner. I got the Blackened Chicken Salad, which was a good choice for me, because now I have some salad to bring to work for my lunch tomorrow.  Steven had a bowl of clam chowder, because he preferred something light.  I also had two glasses of Chardonnay.  They kind of went to my head (don’t judge)  (oh, hell, judge if you want to; I don’t care).

I posted the above picture on Facebook right after I put it here.  It has gotten seven Likes already.  Regular readers know I am kind of a Like junkie.  I guess we’re all happy about a lot of people voting. However, Mohawk Valley Girl tries to stay off politics and religion.  On the other hand, it is becoming increasingly difficult to stay off politics.  I believe that is a topic for another post.  For now, suffice it to say, I voted.  I hope you did, too.