It is how I feel, but a bit less melodramatic today.

No, it is not Wrist to Forehead Tuesday.  It is in the nature of a blogger’s day off, because I am too sad and distressed to make a proper post.  However, I think if I put a few of my thoughts down, it will make me feel better.

Community theatre lost a great asset, and I lost a friend today with the passing of Ilion resident Julianne Allen.  I am profoundly shocked as well as saddened, because she was about my age (you know, not ancient) and not sick that I knew of.  The above picture is from our dramatic scene together in Dirty Work at the Crossroads at Ilion Little Theatre in 2013.  My husband, Steven, directed.  Julianne and I worked on several productions together, and she worked on many more that I was not involved in but enjoyed watching.  She was always willing to do what she could and what was needed.

In fact, in Shattered Angel, she took a part that was originally written for a man.  Director and writer Stephen Wagner originally cut the part but then decided to change the role to the man’s wife and cast Julie.  It was going to be a great bit of comic relief, because Stephen was really utilizing Julie’s attitude. 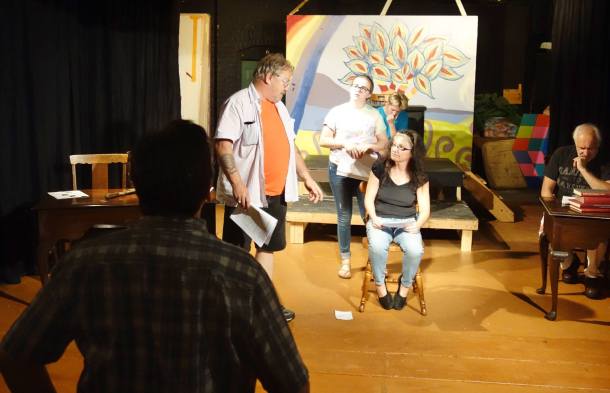 At her first rehearsal, she was already showing us the attitude.

Julie on the left, me on the right, ILT president Kelly Stone in the middle.

Just to end with another picture including me, here we are in Harvey from 2012.  Rest in Peace, Julie.  I hope you’re putting on a great show for the angels.

I Didn’t Mean to be Melancholy

I had meant to make a post about one of my recent Mohawk Valley adventures, but I’m afraid today is going to be more of a Middle-aged Musings Monday, if not Melancholy Monday, or even a Memories Monday.  Oh, all right, I’ll stop alliterating and start blogging.

Today on my Facebook On This Day, I noted that one year ago today we brought our sweet Spunky home from his foster dad’s (I even wrote a blog post about it).  Regular readers may recall that we sadly lost Spunkman (as Steven liked to call him) far too soon (I wrote a blog post about that, too).  I miss having a dog, but the time seems not right to adopt another one yet.

Logging on to WordPress, I noticed a post from a blogger I follow about how she and her guy adopted a puppy, Meet Harper, the Resuce Pup!  Full disclosure:  I do not read all posts by all the bloggers I follow.  This one I read.   Rescue dogs are the best!  And people who adopt them are awesome!  Oh dear, that sounded like I was tooting my own horn, but I was not, really.  For one reason, I have not adopted another dog since losing Spunky.  I don’t know if I ever will, although as I read somewhere, pets happen.

So I am remembering our little Spunky, and our sweet Tabby, who lived with us from 2007 to 2015.  Dogs enrich our lives immeasurably, but so is the sadness immeasurable when we lose them.  I suppose I could say something profound about how you have to have the sad to appreciate the happy, and I even know such a thing to be true.  But I’m afraid it would sound glib and trite, because profundity is not my strong suit.

I also feel I should apologize for intruding sadness into my silly blog, especially when the occasion for sadness is sometime past.  Then again, who can explain emotions and why apologize for them?  I like to say, sometimes you just have to feel that way until you don’t feel that way any more.  I’ll try for a better post tomorrow.

Rest in Peace, My Friend

My heart hurts.  I try to keep this blog all positive and happy and silly, but shit happens, and sometimes I just need the space to say, “This really sucks.”

I feel I should say something more profound or more articulate or at least less vulgar, but there it is.  Life is sad and sometimes we feel sad and there are not a whole lot of ways to say it.

A dear friend lost her battle with cancer yesterday.  My husband Steven found out via Facebook.  Say what you want about Facebook, but I am grateful to it for letting me find these things out sooner rather than later.  You see, we have not been in close touch with this friend in some years now.  We used to hang out with Kathy, her husband and a few others a lot in the late ’80s and early ’90s when we all lived up North.  When Kathy and her husband moved south, we kept in sporadic touch and more recently re-connected on Facebook.

It cannot be denied that her passing sucks way more for others than for me.  Indeed, part of my sadness is for her husband, children, sister, parents, other family members and friends she saw on a regular basis.  Many of them are posting thoughts and pictures on Facebook.  It is wonderful if heartbreaking to see the pictures of Kathy smiling, happy, full of life.  That is how we will remember her: her great spirit, her large heart.

So this is the best I can do for a blog post today.  It is Halloween and soon I must greet the trick-or-treaters.  No doubt they will put a smile on my face.  And I will smile as I remember my friend.  She is probably up there singing with a heavenly choir now.  Peace, Kathy.

Yesterday I made up my mind I would run today after work then write my blog post about my run. I tried to ensure that I would do this by telling people at work that I intended to run. This technique is not as successful at this job as it has been at other jobs, because nobody there much cares whether I run or not and are unlikely to ask me about it the next day. Still, as they say, I’ll know.

I had a kind of a bad day at work. Work was fine, but I was in a sad mood I could not seem to shake. I chalked it up to Monday and hoped a run would straighten me out. I had just read another blog about a run which inspired me, http://theblogrunner.wordpress.com/. Sometimes running is just what you need.

Then I got home and checked messages. The pastor of my church is dying. He has been in bad health for some time now and in fact recently retired because of it. We had heard he was in the ICU. Today there was a message from another parishioner leaving her number if I wanted the update. He has not many days left to him. Prayers are asked for. I cried.

Full disclosure: I don’t go to church every week. I’m not very religious and sometimes I’m not even very nice. But Father Paul is a dear, sweet, wonderful man. I can’t express how sad I am. I thought a run would definitely help me now.

After a minor debate about what to wear (it’s cold, but not that cold, then again I’m not in top running shape, etc etc), I put on leggings and my long-sleeved army t-shirt. A headband to cover my ears, I was set. It turned out to be just the right amount of clothes for the temperature. I pulled the sleeves over my hands. I could rock this.

But I couldn’t rock it very fast. I soon felt that I was plodding along in a ridiculous fashion. I felt fat and middle-aged. Well, I didn’t think the run was going to instantaneously cheer me up. I kept going.

I never got any of those endorphins you hear about. I never even reached the “I can rock this” stage, although eventually I realized I could at least keep up the plod for as long as I decided to. I decided to keep it up for about as long as my last run. Maybe a little less. Definitely not more.

I didn’t mind it not being a good run. I did mind that little voice that popped into my head saying things like, “Why are you even doing this? What good is this doing you? What good does anything do anybody?” I ignored the voice as best as I could and kept going.

Then I heard a squeaky noise. Was that a dog? Or a bird? It was a puppy, on a chain outside a house.

“Hi, cute puppy!” I said. He was behind a fence, so I couldn’t pet him. I don’t like to pet strange dogs anyways, unless their people are right there to ask. The dog looked at me and started making whimpering noises. Oh dear, he was sad! He wanted to go in the house. After I was past, he returned to the door and continued his high-pitched barking. I wanted to go knock on the door and say, “Let that puppy in the house!”

I don’t know how long that puppy was out there. I don’t think it was too cold for a dog to be outside. Perhaps his owners had a very good reason for having him out there. But he wanted to go inside! I felt so sad for that little puppy, I cried when I walked my cool down with Tabby.

Sometimes when you feel a certain way, you just have to feel that way until you don’t feel that way any more. I will at least strive to not write such a downer blog post tomorrow.

And I may go for a short walk later, just to see that the puppy has been let back into the house.