I Wine a Little

I pause in my Friday relaxation to make my Friday Lame Post. Actually, my real relaxation has not fully started, because I was trapped in Scroll Down Facebook mode. I keep thinking I’ll see something good, and sometimes I do. My favorites are pictures of people’s pets and photos of classic monster movies.

I am doing that home COVID test: pour a glass of wine. Can you smell it? Taste it? If so, you’re good. Repeat as necessary or desired. The above picture was taken on my birthday. It was the first wine photo I came across in my Media Library.

I repeat the photo of the adorable, sadly departed Bubbles, to illustrate my enjoyment of pictures of other people’s pets.

To illustrate my enjoyment of old movie pictures, here is Vincent Price in House of Wax. Ah, but I said monster movies, didn’t I? Of course, one could argue that Price becomes a monster in this. It is part of his charm.

Here is a real monster for you purists, Bela Lugosi as Dracula. I see I am over 200 words. I shall end this lame post, log out of Facebook, and watch Forensic Files with my husband (speaking of people who are monsters). Happy Friday, everyone!

Our sweet pooch, Spunky, left us this morning.  He woke up when Steven came downstairs, then he laid back down, fell asleep and never woke up.  We petted him, and watched him breathe, but we pretty much knew he was dying.  I am too sad to make a blog post about it, but I thought I could share a few pictures of Spunkman, as Steven liked to call him.

The first picture was our first view of him, posted on Facebook by the Velvet Dog, who was fostering him when his first owner died.  He was just as cute in person. 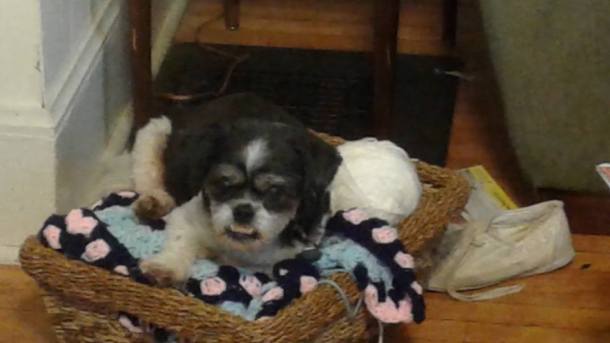 One of many beds Spunky adopted.

The basket was given to me by my sister, Cheryl, to keep ongoing knitting or crochet projects in.  That is an unfinished afghan Spunky is getting comfy on in this picture.  I had to admit, the basket was a perfect size for him.  I took out my unfinished projects and made an afghan for Spunky to sleep on in the basket.  Now I suppose I can have it back.  Spunky had several places he liked to snooze:  on the end of the couch on an afghan, on my clothes I left lying around.  Um,  I mean, I never leave my clothes lying around.

And here is one more picture, just to make it three.  I loved my little Spunky.  I hope there is a doggy heaven and that Spunky is there now.  And if people heaven is different from doggy heaven, I’d rather go to the doggy one (oh yeah, right, like I think I’m going to heaven).  Good-bye, little doggy friend.

Oh dear, I’m afraid this may become Non-Sequitur Thursday after all, because all I can come up with so far is the headline.  Still, it would be rude not to explain.  Kind of like those people on Facebook who make posts like, “What a big decision to make!” or “I may have some big news to share” or… you know.  It drives everybody nuts, but apparently the temptation to do so is almost overwhelming.

However, this is not Facebook but my own blog and although I maintain I have a perfect right to pair what title and post I please, I will explain.

Regular readers may remember that Steven and I lost our beloved schnoodle Tabby last June.  We have greatly missed having a dog in the house.  We knew we would eventually get another pooch.  Of course there will never be another Tabby (I feel sad all over again just thinking about her), but many dogs need love and a home, and we could surely benefit from the love and companionship of a dog.

Steven suggested we look for a dog in May, after Leading Ladies (remember, that play I directed at Ilion Little Theatre?).  Well, May came and went, and we just did not make it over to the Herkimer County Humane Society (except for their garage sale, where I bought some fun stuff.  Did I write a blog post about that?).  We did not make it to their Mutt Strut either, although we had planned to. Was it ever going to be dog o’clock for us?

Then The Velvet Dog, where we used to bring Tabby to be groomed, posted a picture of a quite adorable Shih Tzu who needed a home because his owner had died.  Spunky was ten years old, older than we had envisioned.  We would hope to have more years with our new dog than we had with Tabby.  Still, he needed a home!  And many people are unwilling to adopt a ten year old dog for the same reason which made us hesitate.

After asking many questions about Spunky via Facebook, Steven made arrangements to go to The Velvet Dog Wednesday morning to meet him.  I couldn’t wait till lunch time to call Steven and see how it went (but I DID wait, I was not on my cell phone during work hours, just in case any bosses read this blog) (oh who am I kidding?  My boss probably doesn’t even know I write a blog!).  I confess I would not have been disappointed to find out Spunky was already at our house.  However, Steven rarely behaves in a thoroughly reckless fashion.  He liked Spunky but wanted me to meet him too.

Accordingly, I met Steven at The Velvet Dog after work yesterday to become acquainted with Spunky.  What a cute little dog he is!  He is not nearly as rambunctious and friendly as Tabby was, but he allowed me to hold and pet him.  He is still very sad and confused.  When I set him down, he kept going to the door and looking out, presumably wondering why his person hadn’t come to get him.  That made me very sad for him.

Steven suggested we pick him up on Sunday.  We both have the day off so can spend a good amount of time with him before leaving him to go to work on Monday.  I am SO looking forward to having a dog again!  I will probably write a lot of blog posts about him.

I always liked how at the end of The Price is Right Bob Barker used to and now Drew Carey does remind us to spay and neuter our pets (although I do not watch that show on a regular basis).  I am pleased to participate in a fundraiser for spay and neuter programs.  I am especially delighted to do so when the fundraiser uses a play on words for its title.   So I made a definite plan to go to the Spay-getti and No Balls Dinner sponsored by 4PetsSake food pantry (whose name is another good play on words), last Saturday at the American Legion in Mohawk, NY.

The Merlot was tasty.  The dinner was even better.  The spaghetti was not overcooked, as sometimes happens with these large dinners, and despite the No Balls title, two delicious meatballs were included.  We waited till after we had finished dinner and a yummy dessert (brownie for me, red velvet cake for Steven) before looking at the items available for the Chinese auction.

After we left, we sat on the front porch for a few minutes.  I do love sitting on a front porch and am so happy we finally got the weather for it.  Mickey and Minnie Mouse and a large dog were playing on the lawn with a few kids.  The dog petted one little girl.  When we left he was rubbing her tummy.

It was an enjoyable evening, and it got even better when Steven got a phone call that he had won a basket of dog treats from Adirondack Puppy Truffles in Remsen.  They are wheat free, corn free, soy free, handcrafted and all natural.  Tabby loves them.

All proceeds from the dinner benefit 4PetSake’s low cost spay and neuter program.  For more information on that, contact 4PetsSake at 315-796-2584, email pet-sake@hotmail.com, or visit their website www.4petsakefoodpantry.org.  For more information on Adirondack Puppy Trifles, call 315-272-3532, email truffleb@me.com or visit their website, www.adkpuppytruffles.com.  Both also have Facebook pages.