Tag Archives: narrating in my head

Waste Not, Want Not

As I have mentioned many times, when I run, I narrate in my head, as if I am writing my running commentary as I go.  Sometime later, when I sit down and type in my Running Commentary post, I never use all the good stuff.  I usually remember it later and say, Damn!  Well, since today is Non-Sequitur Thursday, I’m going to share a couple of stories from different runs that did not make it through my porous mind into the post that day.

During a recent run in what I call The Suburbs, I had a nice canine encounter (that is an expression I just now made up, “canine encounter,”  do you like it?).  “The Suburbs” are not really suburbs, of course.  I don’t think Herkimer is large enough to rate real suburbs. It is a nice, hilly residential section behind Valley Health Services.  There are no sidewalks, which I prefer to run on, but there is not much traffic.

Regular readers know that when I run, if I see a nice dog, I always ask if I can pet him or her.  On this particular run, I met a lady walking two cute little ones.

The lady said that the boy dog would let me, but the girl might not.  Sure enough, one dog walked right over, wagging his cute little tail.  I tried to greet his sister, too, but she backed off.  He was an adorable black and white dog.  He reminded me of our much missed Spunky.  Considering the resemblance and since I do not run with a camera, I’ll share a picture of Spunkman.  I think illustrations add punch to a blog post.

How I miss my poocher!

The nice dog I petted did not have Spunky’s underbite.  I ran on, turning here and there, choosing some hills and avoiding others.  Soon I saw that I was approaching the lady and her two dogs again.  I thought I would not bother her by asking to pet them again.  However, as I got closer, my little black and white friend started walking towards me.

“I’ll give you pets, you friendly fellow,” I said.  I love dogs!

I can’t believe I left that little story out of my running commentary that day.

The other story concerns a cool-down walk.  Regular readers know I always walk around the block, drinking water after a run.  I usually take about ten minutes.  I figure, my metabolism is all kicked up from the run, so I burn more calories walking around the block than I would otherwise.  Also, it feels awesome to walk after a run.  Well, I was about a block and a half away from home when I saw a folded piece of paper on the sidewalk, so I picked it up and unfolded it. 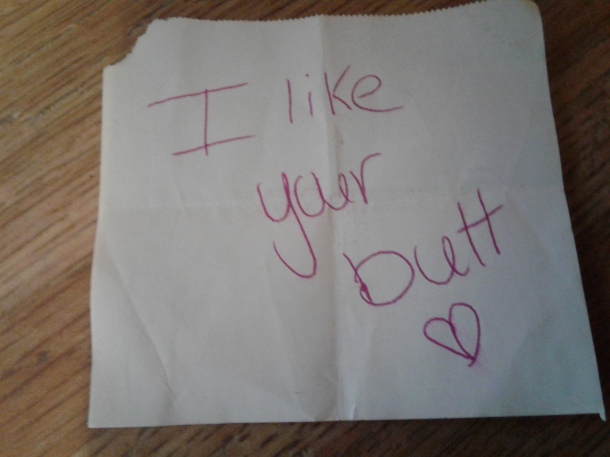 I brought the note home and gave it to Steve.

“I think your girlfriend dropped this before she had a chance to give it to you,” I said.

He did not deny it.

Something of a Running Commentary on Tired Tuesday

Here we are on Tired Tuesday, and I feel as if I just can’t write a thing.  Well, obviously, I just wrote that stupid sentence, as well as this one.  That doesn’t prove anything, because I can just backspace them out and once again be staring at a blank screen.  Crap.

It was almost as hot and humid at my work today as it was yesterday, so I left feeling pretty much as melted (but yet no smaller, it’s no fair).  However, I managed to go running.  I did not ambitiously get right out as soon as I got home. First I sat on the couch, drank a glass of chocolate milk, and looked at the computer.  I had made up my mind to give it a miss and try again tomorrow.  Then I said, oh, what the hell.

As I ran, I thought I would make a Running Commentary post.  I know I just did one on Sunday, but I thought I could get away with it.  Anyways, I like to narrate in my head as I go. I never include all the stuff I come up with, which is probably just as well, because it would make some pretty long posts.  Today I went pretty slowly.  I figured I could make it a short run: 20 minutes.  I could make it for 20 minutes.  Could I make it for 20 minutes?  Sometimes 20 minutes is a long time and not just when you’re at work.  Why couldn’t I get one of those second winds you hear about?

Eventually I realized I was going to make it for 20 minutes, or a little more.  I turned the corner and was headed towards my street.  Suddenly I felt pretty okay and thought I could run further.  I could pass my street, and the next, then run up Main Street and over German back home.  Woohoo!  This is what a second wind feels like!  I felt less second and more windy when I actually got to Main Street, if you know what I mean.  The beauty part was, I still had to run back home, so my run was going to be a decent amount of time. Also, I like running by Herkimer’s Historic Four Corners.

My run ended up being 30 minutes.  I felt pretty happy about that, and my cool-down walk felt pretty darn good. And now I have managed to wrote a blog post.  Not a great blog post, but I think it’ll do for Tired Tuesday.

A Lean, Mean Something or Other

Did anybody think I was so busy with theatrical murder that I was forgetting my Boilermaker ambitions?  Say it ain’t so!  Last week was not the best I’ve had (this is using a Sunday through Saturday week as opposed to a Monday through Sunday week, as some see it) (ooh, that could be a whole other blog post, where the week starts and ends, help me remember that, will you?).  However (are you still with me after those long parenthetical comments?), one can improve.  So I had a good run today, and now I’m going to write a Running Commentary post about it.

I waited to run till almost 11:30, because it was cold this morning.  It was not too cold to run, but I also wanted to hang out with my husband, go to the grocery store, maybe do the dishes…  Of course this would give me plenty of opportunity to talk myself out of running at all, but I managed to avoid that disaster.  As a matter of fact, it was easier to get myself to run than it was to do the dishes, and there weren’t that many dishes.  I was just not in the mood to do the dishes.

Once the dishes were done, though, and I took another Facebook break (that is what I do on Sundays: get a little bit done, look at Facebook, repeat), I got dressed and went.  It was 46 degrees, one degree above my cut-off for shorts and short sleeves, so I thought, Score!  I still put on a wide headband to cover my ears.  I placed my sweatshirt and water bottle in a handy spot for my cool-down walk and took off.

The first thing I did was to re-think my cut-off temperature for shorts and short sleeves.  That wind was cold!  But there was nothing to do but keep running and hope for a hot flash.  It was a sunny day with some clouds (I don’t want to say “partly cloudy” because it really did seem more sun than cloud).  When the sun came out fully and the wind died down, I felt some warmth.  The sidewalks were almost completely bare, so I appreciated that.

I wished my running time were long enough to run up the hill to Herkimer College (formerly HCCC) (pronounced H-triple-C).  I wanted to feel bad-ass, and it was such a bright day the view would have been awesome.  I tried to mentally calculate when I would be running long enough to make it up and back, but I couldn’t do the math.  I went up the hill by Valley Health instead.  That turned out to be challenging enough for me.  I was out of breath by the time I reached the top and turned left. As I noted the sidewalk still rising at a lesser angle, my in-head narration was interrupted by my realization that I did not know the name of the street I was on.  There was a street sign.  Exchange Avenue.  As I continued to run, I pondered what could be the difference between a street and an avenue and how they decide which gets named what.

My goal for the run was 31 minutes, that is, 10 percent longer than I ran last weekend.  My body vacillated between “I can rock this” and “Can we stop now?” I kept going for my full 31 minutes.  As I walked my cool-down, my legs felt wonderful, as if they would soon be capable of carrying me for miles. I told myself I was going to be in great shape for the Boilermaker 15K.  And if I continue to eat sensibly, running will help me attain my weight-loss goals.  I will be a mean, lean, not very fast running machine!