We have been having an utterly delightful time on Shop Small Saturday, obviously a day tailor-made for Mohawk Valley Girl, a lover of all things local. However, it is the bra off, sweats on, wine drinking portion of the day (full disclosure: I may have been sipping a little wine before it was the official time of day to do so). I will attempt to make some semblance of a Scattered Saturday post.

We drove to Little Falls, NY, parking on Main Street. Our first stop was Joyful Vintage Designs, which boasts many items repurposed in imaginative ways. We also stopped ar Paca Gardens, where we made several purchases, although I foolishly did not take any pictures.

We drove to Canal Place, where we visited Fall Hill Bead and Gems, the Mustard Seed, and Mohawk Valley Center for the Arts. We also grabbed a bite to eat at the Cafe at Stone Mill.

Next we stopped at Iron Rock Brewing Company, where we drank a glass of wine.

Returning to Herkimer, we visited Mohawk Valley Community Market, again neglecting to take pictures. Then we went across the street to The End Zone.

We are now home, watching a Christmas movie at Steve’s request, although I am still longing for Halloween. Then again, as that great philosopher Mick Jagged once observed, you can’t always get what you want. It was a perfectly enjoyable Saturday. I can only hope Sunday is as good.

A Busy Saturday So Far

I pause in my activities to make a Scattered Saturday Post. Check it out: I am making a Saturday Post ON Saturday!

We got up stupidly early as usual (not as early as when I work, but still, you would think I could sleep in once in a while). I went for a short run, wrote a few post cards, called my Mom and Dad, all the usual stuff. Then Steve and I set out on a few minor adventures.

First we went to Collis Hardware in Herkimer, NY. We dropped off a basement window frame to have plexiglass put in it. I am embarrassed to tell you how long we have been putting this off, so I will keep that bit of information to myself.

Next we went a little ways up the street to Mohawk Valley Community Market. We spent some time looking at the various vendors.

I asked if I could take a picture of the staff, because they looked so cute in their Halloween costumes.

After that we were feeling peckish so went to Honey Brook Bakery for a treat.

After a brief interlude at home, eating our treats, we drove to Ilion. First we went up Otsego Street so I could show Steve some of the great yard decorations I have been enjoying on my way home from work. Then we went to the Thrift Store in search of materials for our Halloween costumes.

Our last stop was at New 2 You Consignments, where I scored a baggy of bead necklaces. They may not be right for my Halloween costume, but then again, I may stretch a point.

We are now relaxing at home, but soon we will begin getting ready for a Halloween party at the Frankfort American Legion, featuring our favorite band The Posers. Yay!

I Sip Wine and Contemplate Saturday

So it’s Lame Post Friday and here I sit without much to say. I know, when has that ever stopped me? I have been having a pleasant evening, sipping wine and watching true crime television.

This photo was not taken tonight; in fact, I am not even drinking white wine. But I thought it was an apt illustration. I do not rule out having a libation in a public place, masked and socially distanced, of course, at some point this weekend.

I have other plans to accomplish first, however. I mean to go running, even if it is cold and blustery. I have a few Mohawk Valley Adventures in mind, some real writing to do, and, of course, a house to clean.

Just to throw in an example of a potential adventure, here is a picture of Rose Quartz Stand, a gem store on Mohawk Street in Herkimer, NY. I need to support my favorite local businesses, not just the bars and liquor stores!

Another spot I could visit is Renewed and Rescued, part of Mohawk Valley Community Market on North Main Street in Herkimer. Full disclosure: Steven and I browsed there last Saturday before going to the End Zone Pub and Grub. I should have mentioned it in the blog post.

Whatever I do, I hope to make a good blog post about it. As always, I hope you’ll stay tuned.

Plugging Away at the Blog

Yesterday I said I was not too tired for monsters. Today, I think I am. What a big baby I am! Four lousy days of work, what’s my problem? At least tomorrow is Friday. TGTF. Hmmm… doesn’t have the same ring to it.

Be all that as it may, I still want to make a blog post. I think I will speculate on some of the things I could do this weekend. The last Saturday before Christmas! Yikes! I have purchased very few Christmas presents for anyone.

I could go to Mohawk Valley Community Market on North Main Street. I saw some sweet tree ornaments there as well as jewelry and other handcrafts. I admired some gorgeous handmade wood furniture by One of a Kind by GS. The beauty part about that is that after I shop, I can bop across the street for a drink at the End Zone Pub and Grub.

Another Herkimer business I have not been in a while is the Rose Quartz Stand on Mohawk Street. I especially love the carved stone animals. Right down the street from that is the Emporium, another vendor market. After that I just may head on down to Valley Wine and Liquor for a nice bottle of wine.

How is that for a few plugs of local businesses?

How about a Wordless Wednesday Post?  Of course, I am never entirely wordless.  However, earlier this afternoon, I stopped by Mohawk Valley Community Market and took several pictures.  The above was taken just as I walked through the door.

The sign in the chair said when Santa will visit, but I did not make a note.  No doubt you can find out via their Facebook page.  I am sure social distancing rules will apply.

I love vendor marts like this, because you always see something different.  I will no doubt be back to Christmas shop.

Mohawk Valley Community Market is located at 140-142 N Main St., Herkimer, NY.  They are open 10 a.m. to 5 p.m. Tuesday through Friday,  10 a.m. to 2 p.m. Saturday and Sunday.  Special hours may be in force for this weekend, but they will be open and obviously ideal for Shop Small Saturday.

I had a pretty good Scattered Saturday.  I had to be careful not to overdo it, because I might be running 15K again tomorrow.  I believe I mentioned the mini-maker at Copper City Brewing in Rome, NY Sept. 13.  Even though I ran my official Virtual Boilermaker last Sunday, I am signed up for the run in Rome.  I messaged Copper City and offered to act as a volunteer instead, if they needed another one.  In any case, I will be up early in the morning and off to Rome.

With a possible 15K in mind, I took a short run this morning.  On my cool-down walk, I stopped at a neighbor’s house, where they were setting up a garage sale.  They did not mind me taking a sneak preview.

Before garage saling, however, I had other chores to do.  I put a load of laundry in the wash and wrote a few post cards.  After the laundry was in the drier, I headed to Richfield Springs Community Food Cooperative, where I planned to have a cup of coffee and write. 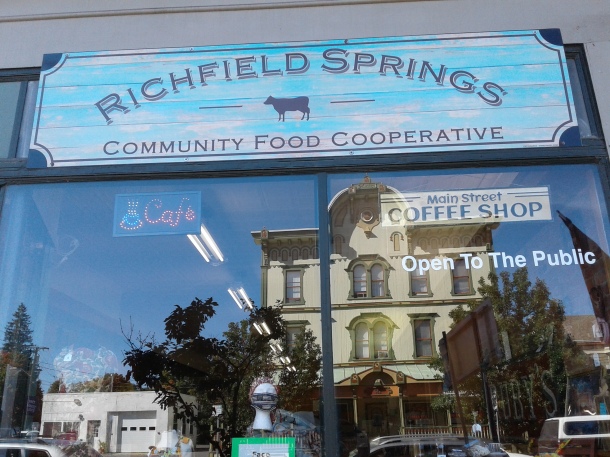 Note to self: try to get a better picture.

For a picture of the Co-op, this shows a nice view of the opposite side of the street.  After that pleasant interlude, I went back home to Herkimer to consider further options. I went to two neighborhood garage sales, where I made a few fun purchases.  Then I decided to walk to Main Street to the Mohawk Valley Community Market, which includes Renewed and Rescued, and Wakefield Furniture.

Unfortunately,  it was close to their closing time when I got there.  I went across the street to the End Zone Pub and Grub for a beer.  When I was in the army, a drill sergeant said it was a good idea to have one beer the night before a PT test.  YES, I had just one beer!

Now I am home and taking it easy before my big day tomorrow.  I had a bowl of pasta and I am hydrating.  Am I better prepared to run 15K than I was last week at this time?  I don’t know.  However, I had an enjoyable Saturday and I am looking forward to Sunday.