Mummers Is The Word

I just got back from a Mummers rehearsal.  What is Mummers, you may ask.  Well, it’s a theatre thing, and regular readers know I rarely say no to theatre.  Come to think of it, I may have mentioned our Mummers group before,  because this was not our first rehearsal. I feel sure my readers will forgive me if I repeat myself.

A Mummer performance is a traditional Irish entertainment.   It was described to me as guerrilla theatre.  We just walk into a crowd and go, like a flash mob.  It is a stylized performance,  with rhyming speeches, music, dance, and a sword fight. I  think it’s going to be cool. 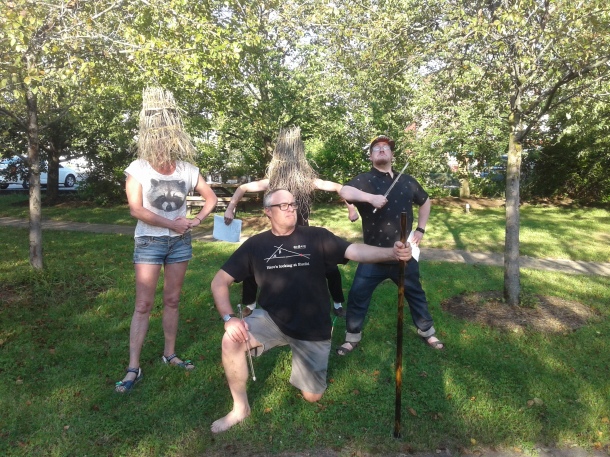 We will perform a few times at the Great American Irish Festival in Frankfort,  NY, in July.  Just tonight we agreed to give a preview performance at Little Falls’ Third Thursday.

A candid shot of two performers discussing the show.

We decided on a name for our group: Mummers Along the Mohawk. Isn’t that a perfect group for Mohawk Valley Girl to be a part of?

I’ll have more information about Third Thursday and about the Irish Festival.  In the meantime,  I have some lines to learn and a costume to get together. Theatre is my life!