I am torn between my usual Wrist to Forehead Sunday post and posting a profound thank you to my father, in honor of Father’s Day.  Well, I am poised with the back of one wrist on my forehead because although my father deserves the most profound and thankful of posts, I just don’t know how capable I am of writing such a post.

I really have the most wonderful father.   When I was a little, little girl, I thought he was funny enough to be a comedian on TV, because when we were watching Underdog and they would sing,  “Unnnderdog!” my Dad would sing, “Unnderwear!”  As the years went on, I had no reason to revise my opinion.   My father is funny as all get out.  My whole family has a lot of laughs when we get together.

My father is also highly skilled at many things.  His hobby is restoring classic cars.  Come to think of it, I need to bring my Tablet to his house, take some pictures and do a blog post about some of his projects.  Dad is also a craftsman when it comes to painting and hanging paper, among other household improvements. He has offered to help me with my poor house, although first I have to clean, and let us not contemplate that revolting necessity.

I will also mention that I seek advice from my father in many situations.   Remember when you were a teenager and you thought you knew everything and your parents were woefully ignorant?  Boy were we wrong!  Actually,  I think I always knew my Dad knew more than me, at least about some things.   Now I know, it’s A LOT OF THINGS!

I guess I can’t be as profound as my Dad deserves,  but I can say, I love you,  Dad.  Thank you for being you.

Let me preface this post by saying that I have a terrific father.  He is fun, he is funny, he gives great advice and he is always there for me.  However, I wanted to make a kind of a different Father’s Day post, perhaps involving pictures, so I thought I would discuss a couple movies in which fathers play a key role.  Spoiler Alert!  I may give away a few salient plot points along the way, so if you have never seen The Wolf Man or Hush… Hush, Sweet Charlotte, you may like watch them before reading this.

Last night we watched a movie involving a rather sad father and son story, The Wolf Man with Claude Rains and Lon Chaney Jr., as the father and son, respectively.  Chaney returns home, because his elder brother has died.  There is a nice scene where Chaney and Rains discuss how they don’t talk about their feelings and so are not that close, but that they are going to try to do better in the future.  Then, of course, Chaney gets turned into a werewolf and comes to a bad end, and it is very tragic, in addition to being a scary monster movie. 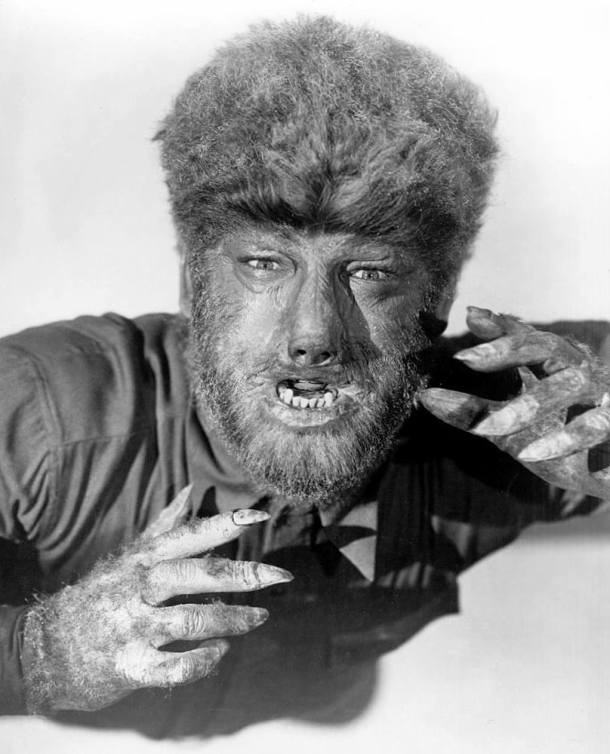 “Holy crap, I DO look like hell first thing in the morning!”

I can’t find a good shot of Claude Rains, but here is Lon Chaney, Jr., looking stunned and horrified at what he has become.  Bela Lugosi also has a small but pivotal role.

Not as slick as when he played the Count, perhaps, but, still, Bela.

Another movie I watched recently in which the father plays a pivotal role, although not nearly as large a role, is Hush… Hush, Sweet Charlotte.  In fact, Victor Buono, as Charlotte’s (the incomparable Bette Davis) father, is listed as Guest Star on the DVD cover.  He is an extremely important character, however.  In the opening scene, he orders Charlotte’s married boyfriend to break things off with her.  When the boyfriend is subsequently murdered, the father whisks Charlotte off to Europe, so she is never forced to face charges for a murder she may (or may NOT) have committed.  Dear old Dad is dead for most of the picture, but his shadow looms over the proceedings.  One thing that cannot be denied is that he loved his daughter, and she him.

And, just for me, here is a shot of Davis, chewing the scenery divinely:

I know, you all thought I was going to talk about Atticus Finch or Spencer Tracy.  I don’t know why you thought that, but never mind.  I will repeat that my own father is an awesome human being, and I wish a Happy Father’s Day to him and all fathers.