Boris and Bela Could Not Help Me

That shot is from the movie The Black Cat, starring Bela Lugosi and Boris Karloff. I recently saw it, on a DVR’d episode of Svengoolie. I started writing a blog post about it but was unable to complete it.

So here I am, typing (pecking on my Tablet with the stylus, really) during commercials while watching Dateline (she totally did it!). It surely is Tired Tuesday (and I’ll call you Shirley if I feel like it).

One reason I am tired is that I went to the laundromat after work. I inadvisedly decided to bring my laundry home to dry, since my drier survives. It would have been fine if it was one normal load. It was more. My drier has been at it for nearly three hours now. Lugging the wet laundry home and downstairs to the drier was not much fun either.

But just listen to me whine. What a big baby! Never mind. I’m too tired to go back and edit it to sound more cheerful. I’ll just have to look bad. We’ll see what I look like on Wuss-out Wednesday. As always, I hope you’ll stay tuned.

I did say this was going to be Non-Sequitur Thursday,  didn’t I?  I tried to get a few things done, but nothing leaps to the foreground as a bloggable adventure,  so I am just going to blather on for 200 or so words.  That usually works out for me.

I did not go running this morning but spent an hour working on my yard.  Remember what I said about I fought the lawn and the lawn won?   Happened again.  But at least I got some good exercise and a vase of daisies for the telephone table (yes I still have a land line, I thought you knew I was old).

Flower arranging is not my forte.

I went ahead and took the picture with all my mess, because I thought some people might like to feel better about their own less than pristine houses.  Oh, I know, either your house is pristine or else you are so secure you don’t need my help to feel good about yourself  (the imaginary readers I talk to in my head certainly are a smug lot, aren’t they? ).

As long as I was taking pictures I thought I’d get a shot of the new sandals I mentioned yesterday.  Once again, I did not scruple to include a little mess in the background. 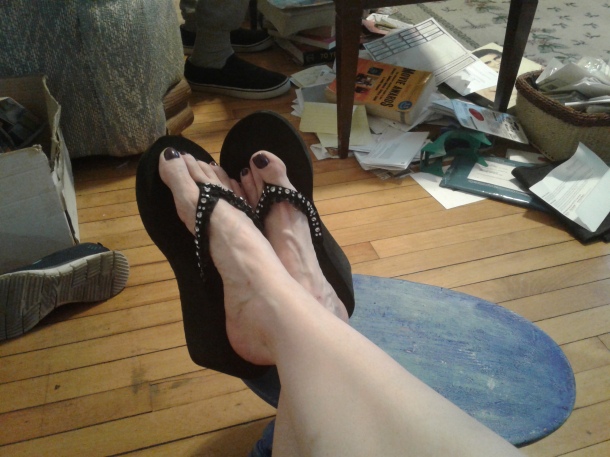 Hmm.. my legs are not as sexy as I thought they were.

Realizing it was not supposed to rain this evening, I put in a load of laundry, so I could hang it on the clothesline.  How I love the smell of things hung out on the line!  While the clothes washed,  I brought up and cleaned off the metal parts of our deck chairs (The cushions are upstairs in the library).  I SO want to sit out on the deck!

After walking to the post office to mail a letter I wrote yesterday (more exercise!), I took a nap, because I had a headache.  The nap didn’t help much, but the iced coffee I drank afterwards did.  After taking the laundry off the line (I folded it at the same time), I went to Valley Wine and Liquor in Herkimer for a bottle of wine.  While there, I sampled two vodkas and some tequila (no, not enough to impair me for the drive home!  Sheesh!).

My Halloween Socks Are Clean

A few minutes ago, I thought to myself, “When in doubt, eat ice cream.” I thought it would be a good lead for a blog post, but it seemed ominously familiar.  Once I finished the ice cream, I looked and sure enough, I once made a blog post with exactly that title.  And pinged back on it two more times.  This will be three.

Full disclosure:  It was frozen yogurt and I realize that, even so, it is a poor way to work toward my weight-loss goals.  In my defense, allow me to explain, “Shut up.”  (That is a joke I proudly borrow from S.J. Perelman.)

I just took a break from blogging and looked for S.J. Perelman on Facebook, to make sure I spelled his name right.  I ended up reading part of a Paris Review interview with him.  Then I realized the Friends re-run that was on next was not one I wanted to see, so I got up and changed the channel to 20/20 on OWN.  As you may guess, I am not particularly focused today.  On the brighter side, I am in a much better mood than I was yesterday.

I did a very little writing earlier, on a letter to a friend.  As I always maintain, any writing counts.

Steven just now reminded me that I have laundry in the washer.  Oops.

The laundry is in the drier, except for the items I hang up to dry.  Now, having skipped around in true Non-Sequitur Thursday fashion, I am going to sign off.  I just remembered I was going to paint my toenails tonight.

Dinner and the Laundry

I mentioned in passing that Steven and I went to the laundromat yesterday (Tuesday). I thought I’d give that local business a proper plug today.

Colonial Laundromat in Ilion is located at 59 Central Ave, about two blocks into town coming off State Route 5. It’s clean and large, with various capacity machines.

We picked the biggest machine for things that had been in the basement during the flood and two of the next-largest for other things. We utilized one of the four change machines to supplement our supply of quarters. Another patron pretended it was a slot machine and cheered getting a big pay-off. That is one of my favorite laundromat jokes.

As I said, it is a nice clean business. A young lady was going around with a squirt bottle and rag, making sure it stayed that way.

Even though doing laundry involves a great deal of sitting around, we were working up an appetite. As our clothes tumbled in the drier, I realized the operative thing to do was to order food for us to pick-up on the way home. This entailed some discussion, because of course we had not planned ahead and, for example, stored any restaurant numbers on my cell phone or even written them in my notebook.

“If restaurants around here were smart,” I said, “they’d hang up fliers in here, so people doing laundry could say, ‘Oh, let’s eat here when we’re done!'”

Hmmm, no fliers. Finally Steven asked the young lady with the squirt bottle did she have a phone book. She did. I made the call, to Sorrento’s, right across the street, at 86 Central Ave.

When the lady heard where we had ordered, she said if she had known, we could have looked at her menu. She orders from there a lot. It didn’t really matter. I had known all day what I wanted for dinner: antipasto salad and garlic wings.

A short time later, as Steven went into Sorrento’s to get our food and I waited in the vehicle, I realized we hadn’t even needed to bother her for the phone book. There was the phone number right on the sign: 315-894-9991. We could have looked out the window and seen it.

So going to the laundromat was not so bad, especially with our reward of a yummy supper.