I Take a Break on Wrist to Forehead Sunday

I am having yet another Wrist to Forehead Sunday.  If only I had a chaise lounge, I would swoon on it in a most dramatic fashion.  Alas, I could not stay there for a week or more, which is what I feel I need to do.

I went running this morning.  It was not a bad run, and I petted a few dogs along the way.  I thought of doing a Sunday Running Commentary post,  but my ennui overcame me long before I could put stylus to Tablet or fingers to keyboard.

Steven and I went on a minor Mohawk Valley Adventure,  to Napoli’s Italian Bakery and Deli in Uitca.  I must write a blog post about that, perhaps even an article for Mohawk Valley Living magazine (the deadline is tomorrow. Yikes!). 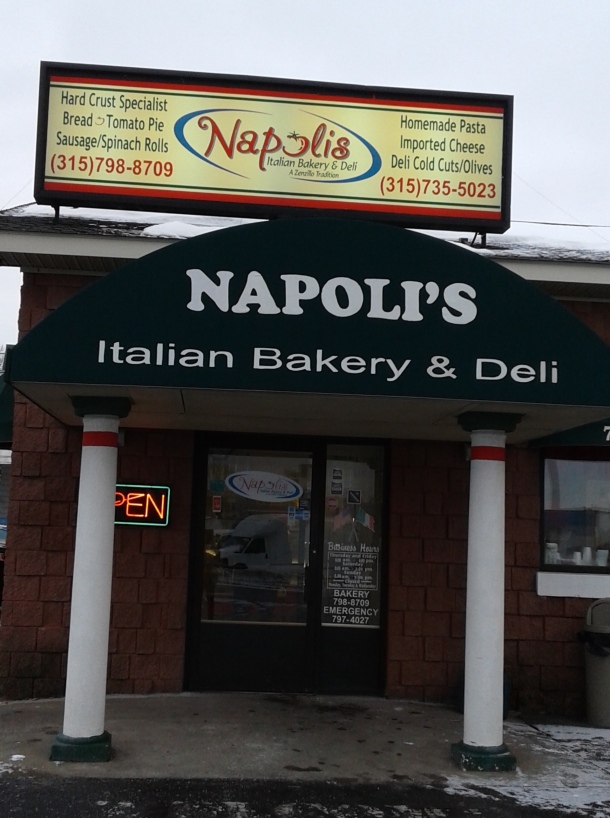 Returning home, we watched an episode of Svengoolie featuring Revenge of the Creature.  It was nowhere near as good as Creature of the Black Lagoon.  No Julie Adams, and a nice dog came to a bad end.  We hate that!

What, I ask you, is the good of the Creature of the Black Lagoon without Julie Adams?

We looked at an episode or two of Snapped while we had something to eat, and are now watching Sudden Fear with Joan Crawford, Jack Palance and Gloria Grahame.

Quite the side eye Jack is giving Gloria!

I am revisiting the question I asked on Lame Post Friday.  Do I cut myself too many breaks?  I still do not know.  However, I am over 250 words.  I call that OK.  Happy Sunday, everyone!

Shakespeare to Svengoolie to Julie

The Blogger’s Sick Days continue, but there is light at the end of the tunnel, although there is always the possibility that it is an oncoming train.  Be that as it may, I am sitting on my couch, watching a DVR’d episode of Svengoolie and hoping to make some semblance of a blog post.

Svengoolie is showing Creature of the Black Lagoon.

I have been feeling marginally better.  Whereas on Friday, my head was in pain, today it was more lightheaded.  Comforting myself with the fact that having been on antibiotics for at least 24 hours I was not contagious (although I believe sinus infections are not contagious to begin with),  I went to the second session of Brainstorming the Bard at Meeples Mug House in Little Falls.

We made a little more progress in our quest to bring Shakespeare back to Little Falls this summer.  I shall blog more about that later (ooh, here’s a Freudian typo: I first typed “bore” instead of “more”).

In the meantime,  how about a couple more pictures of the Creature?  I just love a good monster movie.

“You look a little different from your match.com picture.”

Julie Adams certainly was a lovely young lady.  She was so gracious to fans of this movie all her life.  I was very sad to hear when she passed away fairly recently.

And here she is in later years, still lovely and gracious.

I’m afraid this is not a particularly Scattered Saturday post.  Then again, my health, Shakespeare,  Svengoolie,  Julie Adams.  It will have to do.  Happy Saturday,  everyone!

In lieu of this week’s Monstrous Monday post, I bid a sad farewell to the star of one of Steven’s and my favorite monster movies, Creature of the Black Lagoon (1954). Julie Adams passed away Sunday, Feb. 3, at age 92.  I followed Official Julie Adams Facebook page, and I loved how gracious she was.  She appeared in many movies and television shows, but she was reportedly delighted that she was best known for Creature.

She was still lovely.

I don’t know how recently she was making personal appearances, but I did wish I could make it to one.

You could not blame the Creature for being enamored.

I did not really know Julie Adams for anything other than Creature and her Facebook page, so I cannot do a real biography.  I guess I can’t say much besides I was a fan, and I’m sad she’s gone.

It’s nice to see when antagonistic co-stars are friends off-screen.

I noticed on the Facebook page that she and her son, Mitchell Danton, published the book, Lucky Southern Star: Reflections from the Black Lagoon.  I’ll have to look for a copy.

I guess I’ll close with a picture of her co-star.  Steven and I will no doubt watch the movie again soon, in memory. 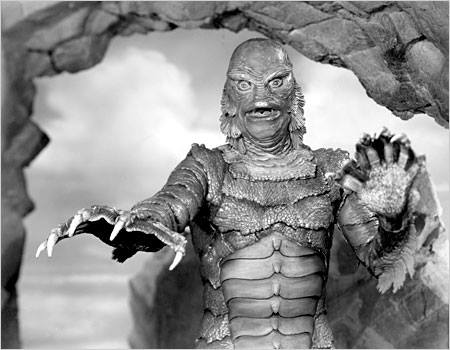 Posted in personal and tagged Creature from the Black Lagoon, Julie Adam, movies. Bookmark the permalink.

How about some Mid-Week Monsters?  It’s a new feature, for when I forgo Monstrous Monday.  It is, in fact, another Pre-Rehearsal Post (I guess that could be a category, too), because we are soon to leave for rehearsal for Donate to Murder, the murder mystery dinner theatre LiFT, Little Falls Theatre Company, is presenting at Herkimer Elks this Saturday, Sept. 15.  Steven and I are wearing our costumes, although I do not have pantyhose on (I’m certain my character would wear pantyhose).  Also, I could not find my grandmother’s pearls, which I thought would work for my character (full disclosure: they are not real pearls, but they look nice).  Luckily I have TONS of beads, vintage and otherwise.

What a long first paragraph.  I do babble on, don’t I?  I thought this was going to be a monster post.  Let’s see what I can find. 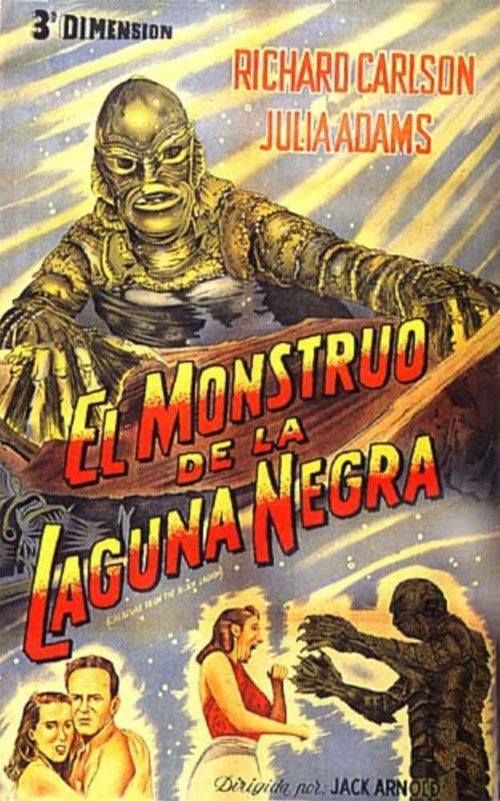 Not the best depiction of Julia Adams, but a pretty cool poster nonetheless.

Look, I can also include a foreign language lesson.  Sometimes I can so multi-task (although most days I barely manage just to task).  Steven and I just watched Creature from the Black Lagoon on Sunday.  Perhaps you read my blog post in which I mentioned it.  And while we’re visiting foreign countries…

I think this one has better artwork, but I like the lettering in the Spanish version.

And look at me, over 200 words on a Wuss-out Wednesday (I guess this post fits multiple categories).  I do like to include three pictures, so I will pull something from my Media Library.

I never knew the Creature guest starred on The Love Boat. I suppose he is quite an actor. Perhaps I could use him in a murder mystery sometime.

All Wet on Wednesday

Feeling yet unable to write a real post and noting that I did not indulge in a Monstrous Monday, I thought I would let a few of our creepy friends cheer me up a little.  Since I adore alliteration (see what I did there?), I declare today Watery Wednesday and I search for creatures from the deep.  Or even the shallow, to match my mind.

“Oh, THAT’S where I left my lady in a bathing suit!”

Who doesn’t love Creature from the Black Lagoon (1954)?  Oh, I suppose YOU don’t (you know who you are).  Julie Adams (pictured here with the green guy) (I’m guessing he’s green; the movie was black-and-white) is one of my Likes on Facebook.  She comes across as a very gracious lady.

Less gracious but still all wet is the title character from JAWS (1975). I loves me some JAWS.

The alligator is off camera asking his agent why he isn’t in this shot.

This is Lake Placid (1999), a movie I really like.  I was looking for a shot of the alligator but could not find one.

My mood is, alas, not improving, so I shall close with a darker but still wet movie.  Carnival of Souls (1962) begins with a rather horrifying scene involving a muddy river.

The look on her face is about how I feel.

I got this shot from a Facebook page about the movie, https://www.facebook.com/carnivalofsouls1962/.  I like to give credit whenever I use it.

So it seems I am having a Wuss-out Wednesday after all.  These things happen to a daily blogger, at least to this one.  As always, I hope you’ll stay tuned.