So I’m sitting here, idly scrolling down Facebook and half-listening to 20/20 on OWN, and I suddenly think, “Crap! I have to make my blog post!”  In my defense, I have had a lot on my mind today.  Oh, well, we all have our problems. I will sort mine out sooner or later, one way or another.   In the meantime, I think a Throwback Thursday Post will be nice. 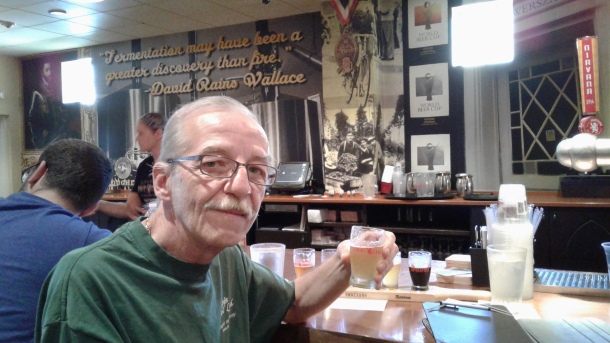 This is my husband, Steven, at the Ommengang Brewery in Cooperstown, NY.   We were having some lovely adventures that day.  God willing, we will have more.

Not quite the usual suspects.

I have shared this memory before: A G.R.A.V.E. Murder, one of the interactive murder mysteries we put on to benefit the Herkimer County Historical Society.  I am supposed to be writing a virtual one, for these COVID times, but so far I am not meeting with success.

One of the first selfies I ever took!

This is from November 2018.  We always feel proud of ourselves for voting. This year Steven voted via absentee ballot, which I obtained and delivered for him, while I voted early (perhaps you read my blog post about it).

I think that makes a nice variety of memories.  Maybe I can go about making some new ones tomorrow.  As always, I hope you’ll stay tuned.

How about another Throwback Thursday Post (even though I am posting large enough that my timestamp probably says Friday)?  Last week was a Theatre Throwback, so let me search my Media Library for something different.

Cool place to eat and shop.

Here is a picture from August of 2019.  Was it really a whole year ago I went to the Main Street Ristorante in Newport, NY?  Time for another trip there, I think.

Another local business I need to get back to: Original Herkimer Cheese in Ilion, NY,  home of Chudder:  tastes like cheese, spreads like butter!  I Like them on Facebook, so I am always seeing their specials.  They currently offer curbside pick-up, so what’s not to like? 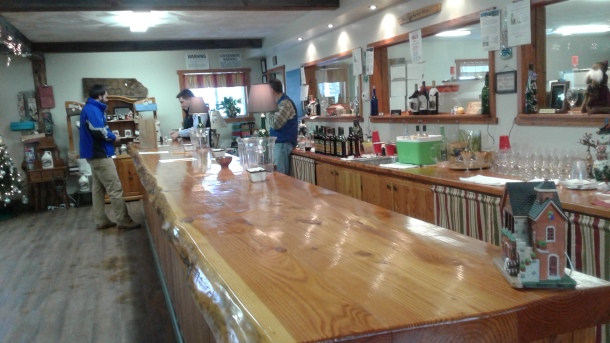 Here’s another great place I’d love to revisit: Prospect Falls Winery.   I’ll have to check if they’re open for tastings again.  Then again, if they are at least open to sell, I can remember a couple of their wines I really like.  Don’t worry: I’ll imbibe responsibly.

Beer is good too.

Here is a place I went to once and would like to revisit: Ommengang Brewery in Cooperstown, NY.  Steven and I went there once and tasted beer but did not take the tour.

There are all kinds of places I need to go to again.  As they slowly reopen, with proper distancing restrictions,  perhaps I shall.

On a recent Friday evening, Steven and I ventured out to Beer Belly Bob’s in Ilion, NY.  They don’t have tastings every week, so we were happy we saw this one on Facebook.  When we realized it was for an area brewery,  we were delighted. I am happy to recommend Red Shed Brewery of Cherry Valley and Cooperstown.

As we walked in, one of the other people tasting said, “She’ll write an article about you!”  I felt famous.

Red Shed would definitely be a good thing for me to write about for Mohawk Valley Living magazine, but I want to visit one of their tap rooms first.  For now I will content myself with a blog post.  David Olson, the man pouring gave me a card, and I have already visited their Facebook page.  I hope to make a trip to Cooperstown soon!

David Olson, one of the folks responsible for some yummy beer.

The first brew we tried was Jessica’s Red.  It won my ultimate accolade of “yummy.”  We went on to Cloudy Girl, which was very fruity.  I did not like it as much as Jessica’s Red, but thought it would be a good summer drink.  The Smoked Porter was heavy, smoky (of course), and very dark  It was tasty, but I could not drink a lot of it. 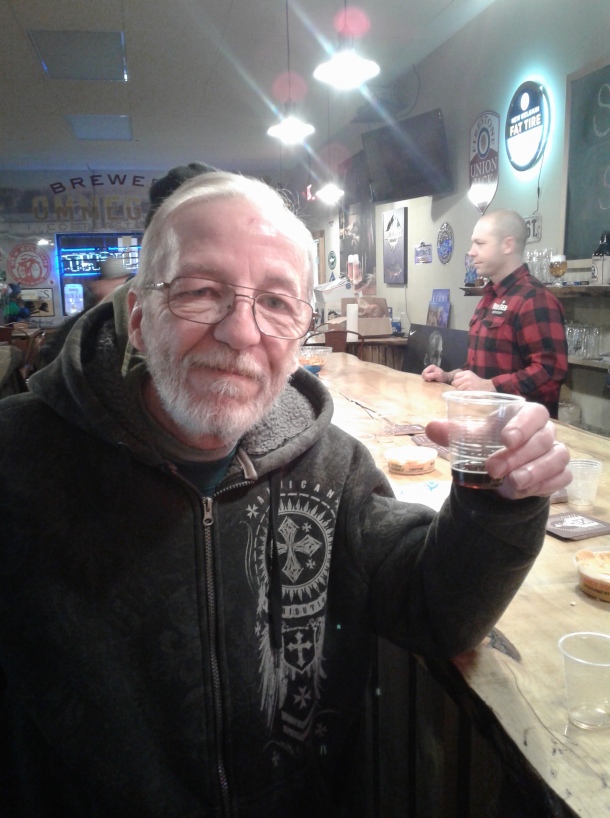 Red Shed is only available on draft right now, but we were able to purchase a growler for a very good price. 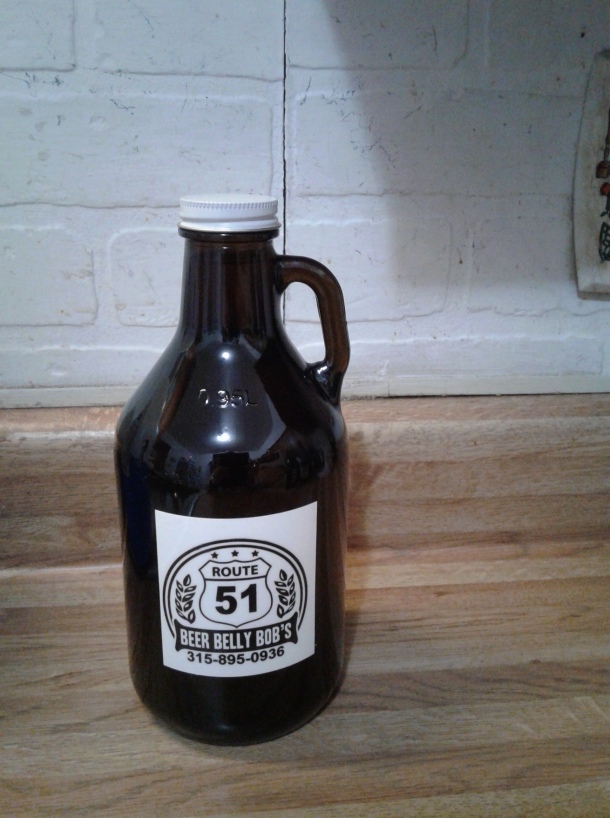 For more information about Red Shed Brewery, you can go to redshedbrewing.com. or visit their Facebook page.

During Saturday’s murder mystery, I had the line, “Yes, that was me you saw at Beer Belly Bob’s.  Yes, I was tasting beer, and yes I bought some.  I like beer, all right?”  I don’t actually drink a whole lot of beer these days, but I do enjoy it.  I especially enjoy tasting different beers.  I had a chance to do that yesterday, when Steven and I went to the Ommegang Brewery in Cooperstown, NY.

Oh, I see it is the Brewery Ommegang and not the Ommegang Brewery. My bad.

We have wanted to go to the brewery for some time now, but the one time we tried we could not find it.  That was the day we had not realized was Hall of Fame Weekend when we decided to go to Cooperstown.  Lots of traffic!  It worked out, though, as we discovered Pailshop Vineyards that day.  Sunday we purposely drove to Pailshop (I hope to write a blog post about that visit later this week).  While there, another nice couple tasting wine said they were headed to Ommegang next and we could follow them.  Yay!

The place was doing a booming business, as to be expected on a lovely October Sunday, but we found parking space without too much problem.  We opted not to take the tour or wait for a guided tasting, but to just sit at the bar and order a flight of beers.   I tried the Lovely Dark and Deep first and said it was, indeed lovely.  Steven liked to too but he does not care to drink a lot of dark beer at at time.  He preferred the Rare Vos Amber Ale, which I also enjoyed.

I thought the Nirvana was more flavorful than the Amber Ale.  Steven liked it as well.  He was not as fond of the Pale Sour, saying it had a sweet aftertaste.  I rather liked the aftertaste, finding it more tangy than sweet. However, I think I would not have liked it so much if I drank a lot of it.  Steven liked the Short Sleeve better than I did, although I thought it was OK.   Ultimately, Steven said he liked the Nirvana and Short Sleeve best.

I only took a couple of pictures.  I’d like to go there again to take the tour and enjoy a guided tasting.  I would also like to have lunch there.  Steven noticed that the portions were enormous.  Oh well, I can eat a lot.

This is a great guy to have a beer with.

I tried to get the quote on the wall in the picture:  “Fermentation may have been a greater discovery than fire,” David Rains Wallace.

I do love to sit at a bar and have a beer.

I’m taking Friday off, so that makes Wednesday my Thursday, right? I bring the matter up, because I threatened yesterday (Tired Tuesday) to have a Wuss-out Wednesday today. In a desperate attempt to avoid that eventuality, I am sitting at work (before my shift starts, not while I’m on the clock, peanut gallery), scribbling in my notebook (the paper, spiral-bound kind; I’m a creature of the previous century), hoping to come up with something.

My husband has Friday off as well. We plan to spend at least part of the day having Mohawk Valley adventures. First we’ll head to Richfield Springs, NY and stop at Dyn’s Cider Mill. I want to get a bag of Dyn’s Popcorn. Regular readers may remember that I make my popcorn on the stove in a pot with oil and melt real butter to put on it. Dyn’s Popcorn is excellent for the purpose.

From there we thought we’d go to Fly Creek Cider Mill, another favorite stop of ours. Steven also suggested that either before Fly Creek or on our way home we stop at Butternut Barn Primitives, 427 Butternut Rd., Richfield Springs, a place we’ve never been to but have heard good things about.

While pondering our plan, I wondered about what other new places we could go. I remembered the Cooperstown Beverage Trail. I didn’t think we could do the whole trail, but perhaps we could check one or two of the stops on it. I thought I had seen a booklet about it at Gems Along the Mohawk in Herkimer.

I did not find information about the Beverage Trail, but in between the retail shops and the Waterfront Grille, there are many fliers about various attractions. I picked up a handful. Now we have lots of ideas!

So things are looking good for future blog posts. I hope to have several business and attractions to write about. In the meantime, I hope this preview of coming attractions will do for now.