Some of us may look a little shady, but we are bad hyphen ass.

Well, rather than whine about how tired I am and that’s why this is going to be a Mental Meanderings Monday, I thought I would open with a picture of the cast of the Tempest, taken after Sunday’s performance. Regular readers know that we just had three performances in four days (Thursday, Saturday and Sunday).  Oh, I know, YOUR play ran for ten performances in three days; there’s always someone!

Performances went very well, but I’m sure I’ve mentioned that already.  Did I mention how hot it can get for some of us in our costumes?  Not the fellow front left, in the shorts and body paint.  I think I may hold out for a similar costume if I do Summer Shakespeare next year (which I keep saying I am NOT going to do and for some reason nobody believes me).  One thing I keep saying is no pantyhose and only one layer.  I suppose it is my fault for not finding a lighter vest, but we all know that the selection in thrift stores only goes so far.  Never mind.  With only two more performances to go, I am more than capable of sucking it up (but please don’t call me Buttercup).

Having rattled on for over 200 words, I think I’ll close with the other cast photo taken Sunday.  The first one we smile, the second was in character. 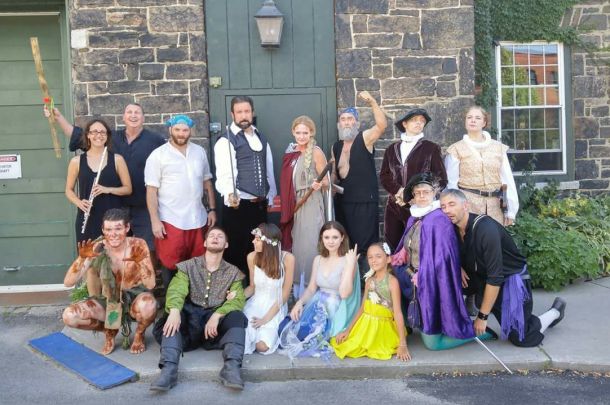 Incidentally, that fellow is asleep in my shoulder because he is drunk. Had he not been there, I may have been smiling in both pics, because my character is rather a happy fellow.