Steven and I are once again spending a quiet New Year’s Eve at home.  Sometimes I long to go to a fancy party, dress to the nines, rub elbows with other fancy people, dance, sip champagne and have a balloon drop at midnight.  Then I find myself sitting on my couch in my sweats, crocheting and watching movies, and I say, “This is the bomb!”  Still, a blog post must be written, so while the current movie plays, I shall type a few words in hopes of entertaining somebody besides myself (of course it will entertain me, but I am notoriously un-fussy in that department).

Steven was enjoying the usual Twilight Zone marathon on Sci-Fi channel, but I confess to not being a fan of that show.  I hope that statement does not lose me any readers, but I believe honesty is the best policy.  Anyways, he graciously agreed to watch movies instead and we enjoyed The Wasp Woman (1959), which I had DVR’d off TCM recently.  I loves me some Roger Corman! 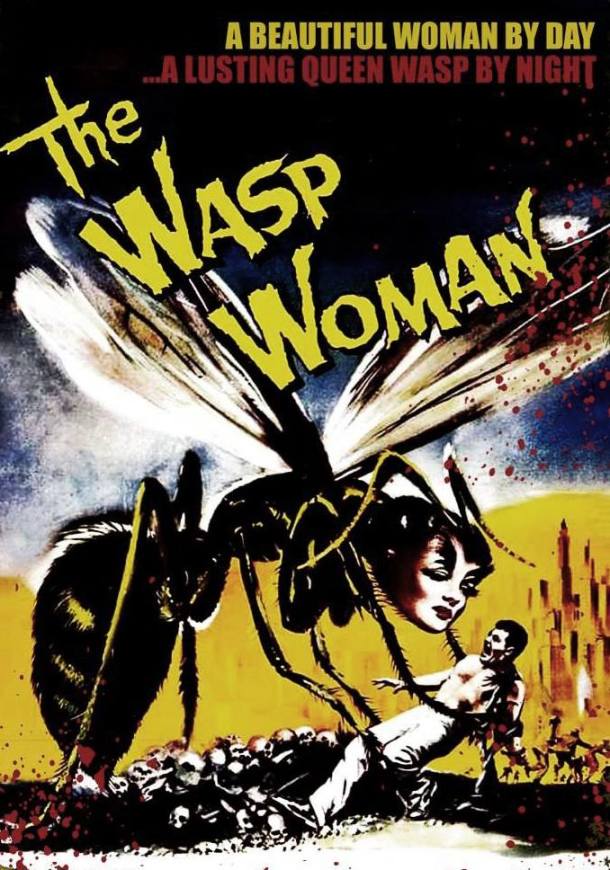 Actually, in the movie she has a wasp head and a woman body.

I wrote a blog post about The Wasp Woman once.  I remembered it being fairly entertaining, and it was.  I missed some of the movie because I was cooking, so I asked that next we watch a movie we have seen, so I wouldn’t mind being in and out.  We settled on Ed Wood (1994).  Back when I liked Tim Burton movies. 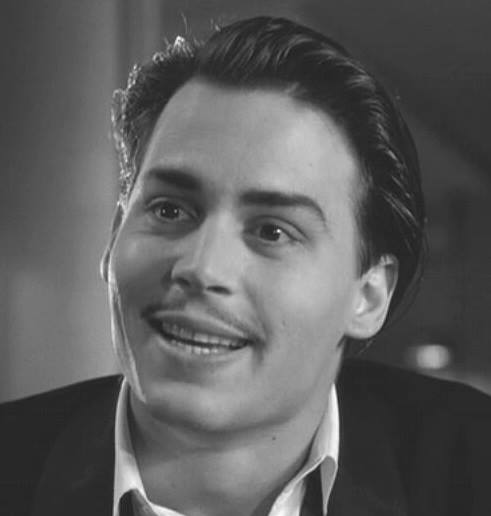 One of Johnny Depp’s better roles, in my opinion.

Next we went to one of our go-to movies, House on Haunted Hill (1959), the original William Castle film with Vincent Price.  I loves me some William Castle! 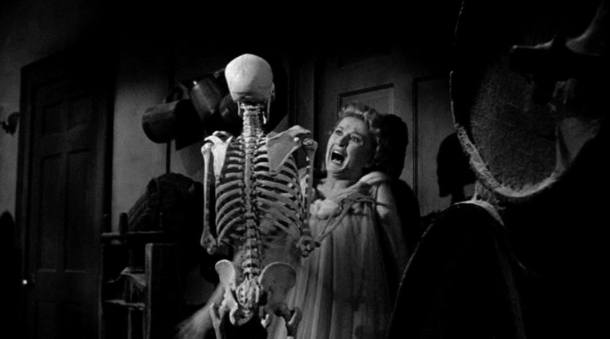 It has always seemed to me that you could win a fight with a skeleton, because they don’t have any muscles. Just saying.

Next I found a video I purchased at a rummage sale some time ago, Brain Eaters (1958).  Unfortunately, Steven found that one rather boring and asked that we switch it out.  I suggested Mystery of the Wax Museum (1933) with Fay Wray.  I consider that a New Year’s movie because in includes New Year’s Day 1933. 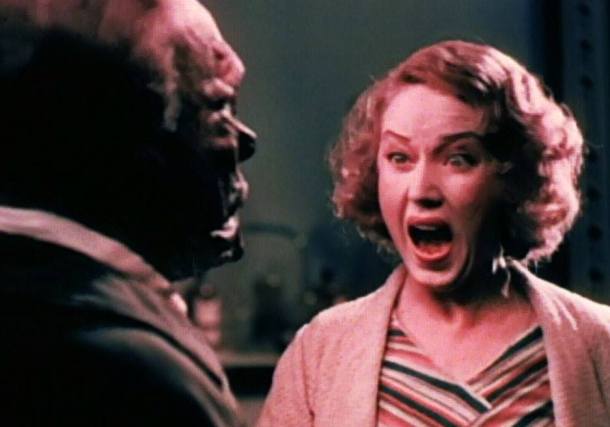 And that brings us up to date.  I am half watching the movie while I type this.  As I am over 350 words, I shall feel free to hit Publish and go back to my crochet. Happy New Year, everybody!

Rest Your Brain with Brain Eaters

My favorite part about Brain Eaters (1958) was that the characters spend a lot of time driving places.  I like to see the old cars.

Spoiler Alert!  I’m going to just tell most of the plot of this movie, at least, as much as I can remember (regular readers know how little attention I pay to these things).

The movie was one of the VHS tapes I purchased recently at a rummage sale (perhaps you read my blog post about it), so its cheesy bonafides are impeccable. Steven and I selected it of the several I had bought because it had the shortest running time, just over an hour.  We wanted to watch several movies that day.

After viewing the movie, I made a note in the TV Journal that no brains were actually eaten or in fact used in the making of Brain Eaters.  I’m not sure what I expected.  Maybe a few munching sounds at least.  Nobody gets to die in agony, which I’m sure was a great disappointment to the actors involved.  It can be a great deal of fun to die in agony, I would imagine even more so on screen than on stage.  On stage you have to either get carried off or lie there and try not to let anyone see you breathe.

Be that as it may, Brain Eaters opens with a scary sort of prologue in which one guy attacks another and something gets spilled. A voice-over says something about a nightmare.  I dislike voice-over narration, although I have always narrated in my head about my own life. When I was younger, my voice was a good deal more euphonious than it really was and had that slight echo like in the movies, and I narrated in the third person. Now I use first-person and have the eventual intent of writing it down in this blog.  But enough about me.  Getting back to the movie, this scene is never explained that I could tell.  Of course there is that not paying attention thing.  Perhaps subsequent events made all clear to the more discerning viewer.  If you are one of those and you watch this movie, please clue me in.

The movie proper begins with a a classic car driving along a road surrounded by a wooded area. The guy in the car is the narrator.  He and his fiance are returning from a visit to her parents, where they set the wedding date.  They are about to let his father know.  This bit of backstory never recurs, but I mention it because it is the only real backstory any of the characters get.  Perhaps I should not have a beef with that.  After all, we tuned in to see brains get eaten, not believable characters play out human stories.  Only your really classy horror/scifi movies give you both. It’s not really fair to ding the cheesy ones for not.

I was making a note in the TV Journal, so I missed why they stopped, but when I looked up the Narrator and his Fiance were looking at some dead animals in the woods. Come on, Hollywood!  Be kind to animals! (I wrote a blog post with that title.)

Next, they find a cone-shaped space ship and the plot thickens. At least, it gets so dense I didn’t quite know what was going on (Hey! Do you suppose some of my brains got eaten somewhere along the way?  Oh, you’ve probably been supposing that for years).

A government guy is sent to check things out.  All kinds of cops are hanging around the cone, which is now surrounded by scaffolding.  A dashing scientist type is there along with his beautiful assistant.  They don’t know what’s in the cone, but they can’t damage it in any way.  Typical!  They don’t know what it is, but the first thing they try to do is break it!  Dashing Scientist even fires a gun into the opening, so they can hear it ricocheting off the sides as it apparently travels all around inside the thing.

It gets pretty dull and boring for a while when Dashing Scientist crawls into the hole and starts wriggling along an endless tunnel while everybody waits outside for him.  Things get a little more lively when they go to talk to the mayor, who just happens to be Narrator’s father.

The group converging on the Mayor includes cops, Government Guy, a few scientists (including Dashing and Beautiful Assistant), Narrator and Fiance.  Before they enter, Mayor is struggling against himself with a gun.  He picks up the gun, aims it at his head, pulls it away from his head, puts it in a drawer. It seems he is struggling with some unseen force for control of his arm.

“Is he trying to kill himself or to not kill himself?” I asked.  It was the most interesting bit of acting in the movie.

You’ve probably guessed that Mayor is having his brain eaten. These creepy bugs attach themselves to the backs of people’s necks and feed on the brain.  While making a hearty meal, the bugs can also control the person’s actions, some with greater success than others, apparently.  Really, the movie is not consistent on this point at all.

They figure out the brain-sucking thing pretty easily with a lightning fast autopsy on Mayor (oh yeah, he gets shot in a dramatic scene I didn’t tell you about) (this write-up is getting pretty long after all).  Seriously, one minute the guy’s is getting shot, two minutes later, the doctor is telling us all about it.  That is some damn good forensic science!

Of course, just because they know the problem doesn’t mean they can deal with it right away, especially since it is more widespread than they realize.  They sensibly call for help first thing (they don’t always do that in these pictures), but it does them no good when the brain eatee in the telegraph office assures them the message will be sent then sends an entirely different one.  The phone is no better when the bug-laden operator keeps telling them, “I’m sorry, that line is busy.”

And then a bunch of other stuff happens.  I know I said I was going to tell you the whole plot, but this post is over 1,000 words already.  Is anybody even still reading?  I kept watching till the end, paying my usual sporadic attention.  It isn’t a bad way to spend an hour on a lazy Sunday, if you like cheesy old sci fi flicks.  Which I do.