More About the Tempest 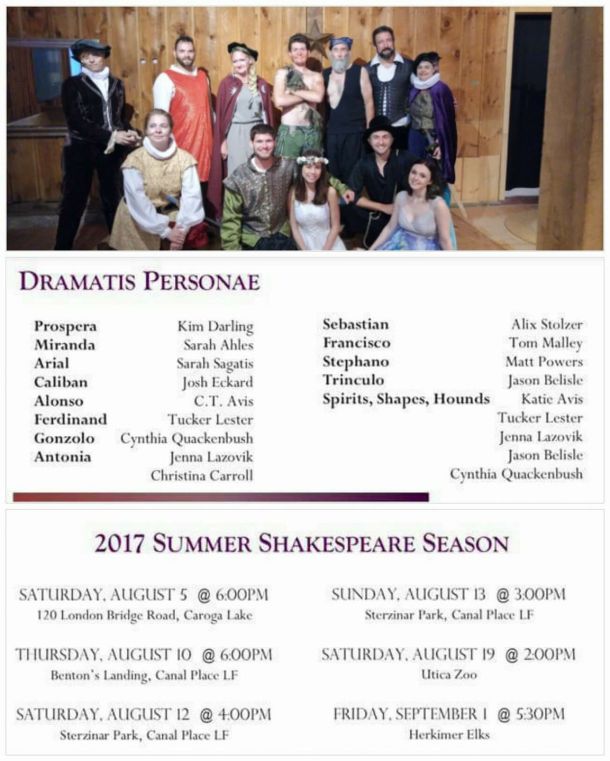 I hope everybody can read it.

It may be All Tempest All The Time for the next couple of weeks.  Our Aug. 5 performance is in the books, but we have shows the 10th, 12th and 13th.  Then we’ll have at least a couple of rehearsals at the Utica Zoo, preparing for Aug. 19.  I may be able to sneak in a few real Mohawk Valley posts after that, but then we’ll be preparing for our final performance on Sept. 1.

Then I’ll start getting ready for Halloween, yes! 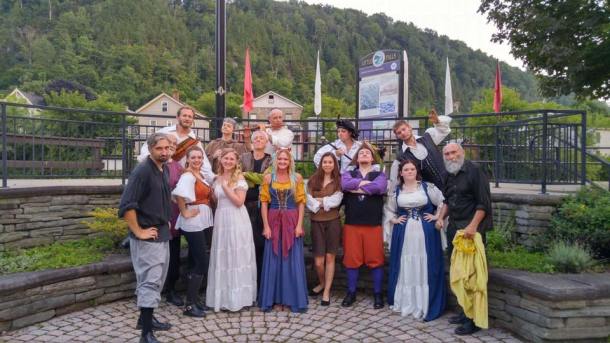 It doesn’t really show the whole space, but you can get an idea.

This is the cast of last year’s summer show, Much Ado About Nothing.  It was the only photo I could find on LiFT’s Facebook page of Benton’s Landing.  As I was adding it to this post, I remembered, I shared some photos of our Preview Performance last month at, you know, Benton’s Landing.  How silly of me! 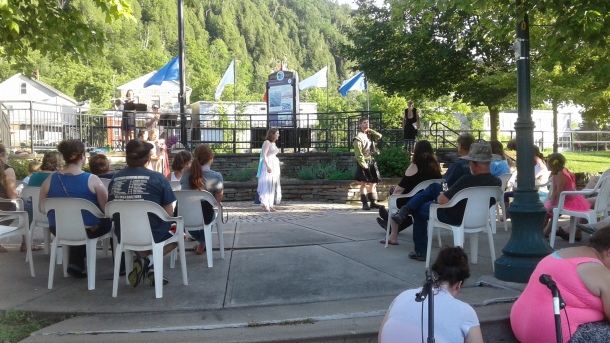 I took this one standing behind the rapt audience (if they were not rapt, I would rap them on the noggin!) (just kidding, in order to make a pun).

So I am getting ready to go to rehearsal at Benton’s Landing.  Tomorrow is the performance.  Yikes!  That happened fast!  How did three days of this week just slip right by while I was at work thinking time was dragging on?  Ah, that is a topic for Lame Post Friday, when I occasionally indulge in half-baked philosophy. Now Friday seems pretty far away.  Perspective! 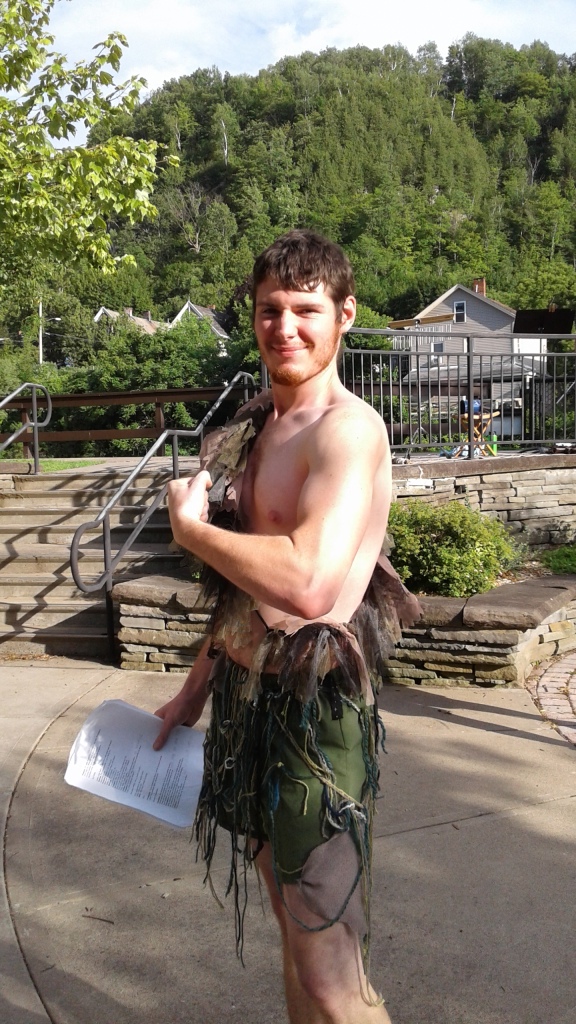 When in doubt, lead with the picture of the half-clothed muscular guy.  Oh dear, was that sexist and exploitative?  I was just trying to get your attention.  These are more pictures from LiFT Theatre Company’s preview performance of The Tempest last Thursday at Benton’s Landing in Little Falls (see yesterday’s post, if you haven’t already).  The chest-baring dude is our Caliban, a son of a witch (no, really, his mother was a witch; she’s not actually in the play, but they mention her) and kind of a monster (although the guys that call him “Monster” are drunk).

It’s too bad her face is in shadow; I’ll try to get better shot for a future post.

And here is our Ariel, a tricksy spirit who is servant to Prospera, the deposed Duchess of Milan.  I don’t have a great picture of Prospera, but here is a not too awful one of her and her daughter, Miranda. 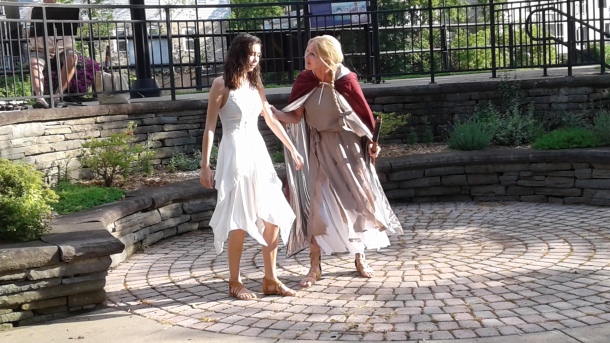 Don’t worry; she’s nicer to Miranda in other scenes. 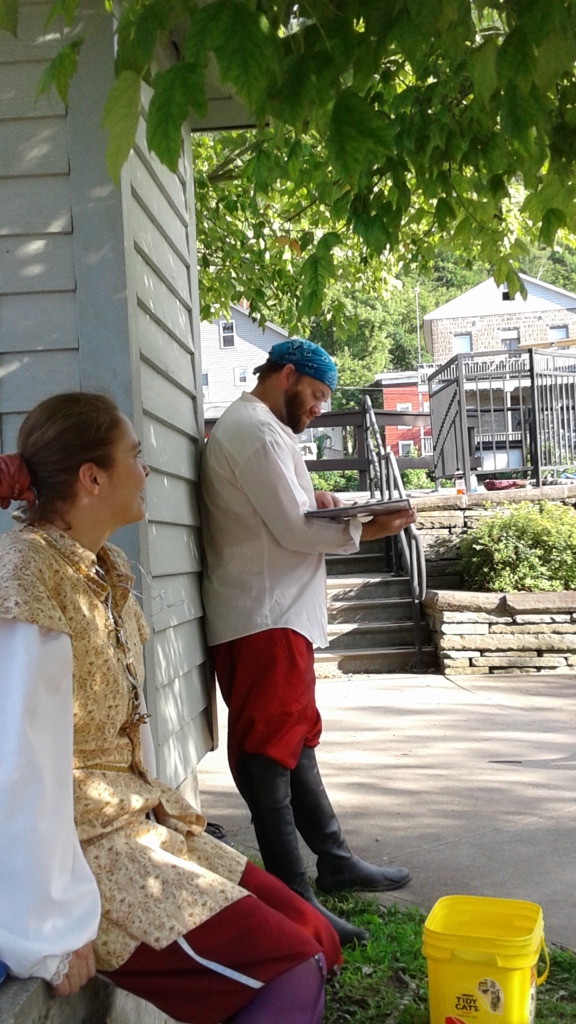 Antonia is in the foreground; Trinculo is on book.

Trinculo is one of the fellows who calls Caliban “Monster.”  Caliban is apparently not offended by this form of address.  Right now Trinculo is “on book.”  For the uninitiated, that means he is standing by in case an actor forgets a line.  The actor has only to yell, “Line!” and the prompter supplies it.  In the movies, I’ve seen prompters backstage during performances, loudly whispering forgotten lines to hapless actors on stage.  I personally have never been in a play where this was the case.  However, we presented the Preview Performance as a Work on Progress.  Hence, the prompter.

Astute readers may have noticed that I have referred to people by their character names only.  Well, you see, I did not want to take a chance on misspelling anybody’s name, and I do not have ready access to this information.  I know, real bloggers research this sort of thing in advance.  And here we come to the ugly truth about me.  I can’t worry about that now.  I have rehearsal in less than two hours and I haven’t even showered yet.    Additionally, today is Non-Sequitur Thursday.  I’ll just slap a catchy headline on and hope for the best.

Oh crap, now I have to think of a catchy headline.

Preparing for the Preview 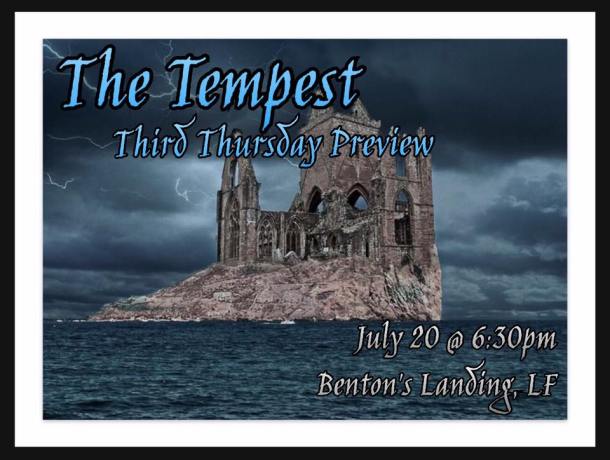 Did I mention I might be seguing into All Tempest All The Time sometime soon?  Well, I am once again posting in haste (posthaste, remember?) before hurrying off to rehearsal.  We are rehearsing on Benton’s Landing in Little Falls, NY, instead of our usual Sterzinar Park, because that is where we are having a Preview Performance tomorrow.  Performance tomorrow!  Yikes!

The preview promises to be different from the usual, “Here’s a scene or two, come see the whole show later!”  It is a performance “under construction,” according to the Facebook event.  The audience will witness and perhaps participant in the rehearsal process in “our most immersive preview yet!”

I still have to figure out my costume.  From the waist up, I think I’m set, although I would like a hat.  With a feather.  I think my character would definitely wear a hat with a feather.  From the waist down, well, I’ll think of something to put on that looks halfway period, to be improved upon before actual performances.  Come to think of it,  I was kind of like that for last year’s preview for Much Ado About Nothing, only without the “halfway period.”  I had a terrific top and trusted the audience to ignore my bicycle shorts.  I found suitable pants at the Thrift Store at a later date.

So any local readers who are looking for something to do tomorrow, July 20, stop on down to Benton’s Landing in Little Falls at 6:30 for a preview of The Tempest.  I’ll be there!