Some Prettiness to Brighten the Morning

I take a break from recounting my own sweaty efforts (was it getting a bit old? I feared so) to share some of the pretty things that have been happening with no effort on my part.  I love it when that happens.

Pretty and impressive as well as pretty impressive, I think.

The rhododendron (is that how you spell it?  It did not show up on my predictive text thingy as I hoped it would) was here when we moved in.  The only thing I’ve ever done for it was to use my foot to break off some dead branches several years ago (my goodness, we have been in this house for fourteen years.  How the time flies once you reach middle age).  When I was running yesterday, I kept seeing large rhododendron and thinking they put mine to shame.  Then I got home and found it wasn’t so.  Good plant!

I liked it so much, I’m sharing two pictures.

I took two shots to make sure I got the forget me nots underneath.   They have always been there but only recently appeared in the front lawn.  I figured I might as well get a picture of them too.

Now that I look at the picture,  I see an unknown bud.  I’m guessing daisy but will try to keep an eye on it to see if I’m right. 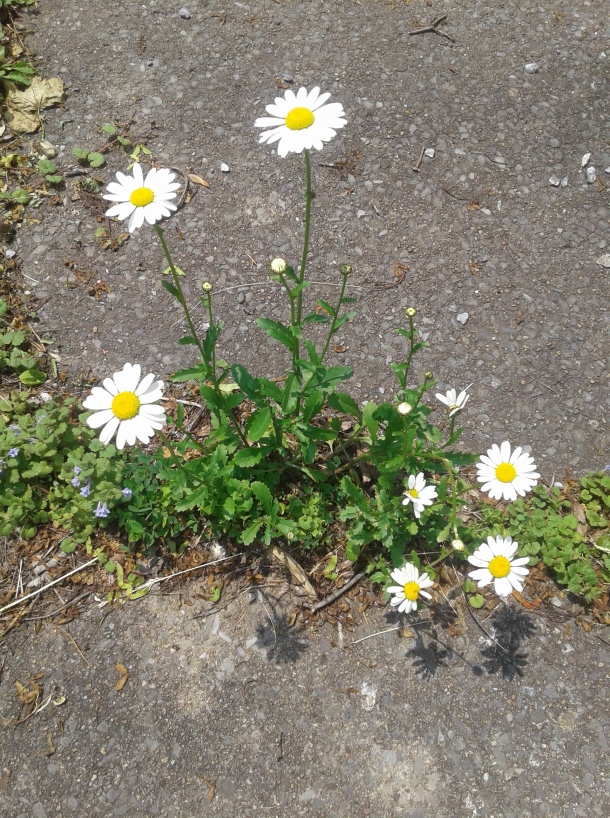 I think you are not supposed to allow things to continue to grow in between the sidewalk cracks, but how can I resist such pettiness?  Then too, I flash on Jeff Goldblum in the first Jurassic Park movie saying,  “Life will find a way.”  Of course it is a scary foreshadowing when he says it, but out of context,  I find it comforting.  Is that a case of reduce, reuse, recycle?  Let’s pretend it is.

So you may have noticed I did not make two posts yesterday so am two posts behind.  These things happen, at least to me.  It is early Sunday morning as I type this, so many things can happen, blogwise.  I await events.

Posted in humor, personal and tagged blog post, blogging, daisies, flowers, forget-me-nots, gardening, rhododendron, yard work. Bookmark the permalink.
← Lots of Questions in This One
In the Mood for Monsters →