Murder or Monsters on Wrist to Forehead Sunday

Are they plotting somebody’s demise?

I interrupt the movie-watching portion of my day for a fast blog post.  Of course I am having a Wrist to Forehead Sunday.  I would swoon onto a lounge if I had one, but that is not the important thing.  The important thing is to make a blog post. My husband, Steven, and I just watched Evil Under the Sun, a star-studded Agatha Christie adaptation, one of our favorites.  We are now looking at House of Wax, the 1953 version starring Vincent Price.  I said I wanted either monsters or more murder.  This is kind of both. 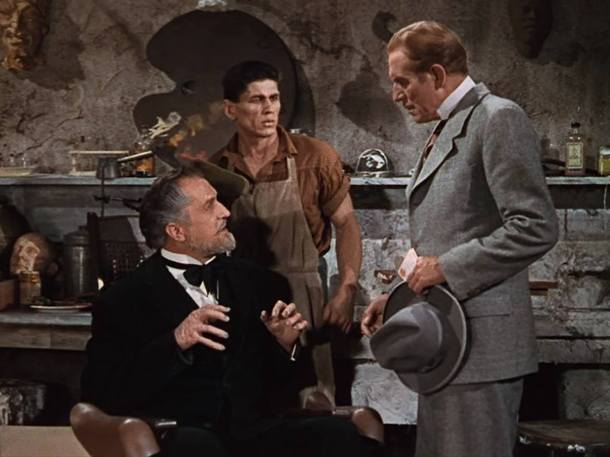 “As you see, my hands are not capable of great art any more.”

A Facebook friend shared the above picture, which got me thinking about House of Wax.  This movie also features Carolyn Jones, in a sadly small role.  That makes me think about watching Invasion of the Body Snatchers, which I would call more monster than murder, although I suppose that would be open to debate.  Feel free to discuss amongst yourselves.

And before this, they were drinking martinis. Mmmm…. martinis…

Carolyn Jones doesn’t have too big a part in Body Snatchers, either.  Maybe I should invest in a couple of DVDs of the old Addams Family TV show.

In the meantime, I’m over 200 words.  I call that acceptable.  We’ll see if I can do better as the week wears on.  Happy Sunday, everyone.