Hotties at the Tavern

I had been wanting to go to Gerber’s 1933 Tavern for the longest time.  When I heard they were having a Prohibition Party, I made immediate plans to go with my friend Kim.  I think I mentioned my problem getting an outfit together.  I think I didn’t do too badly. 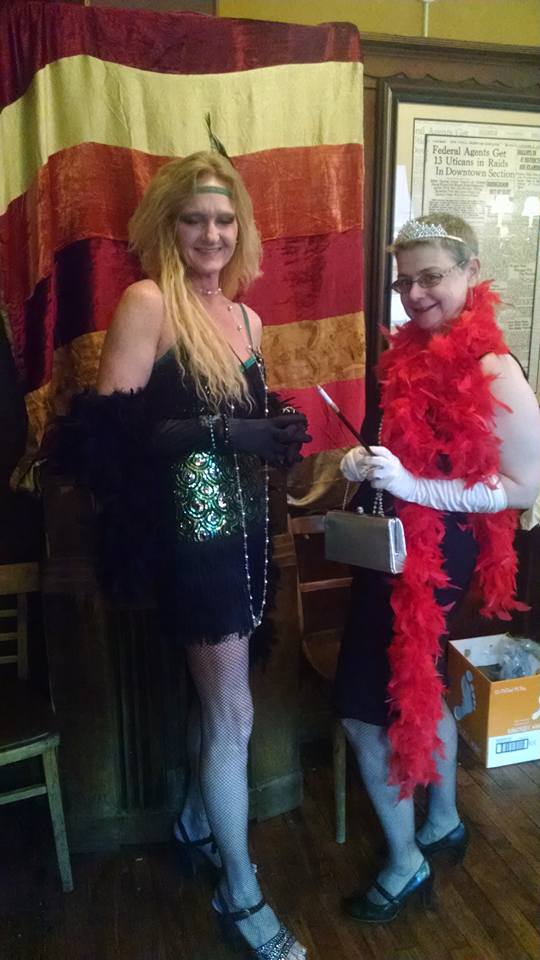 I’m the hottie on the right, in the tiara.

The Tavern is a beautiful place.  It looks as if it hasn’t changed much since the ’30’s.  Um, not that I was around in the 1930’s.   I’m not that old.  We sat at the bar and ordered drinks.  The service was awesome. We ordered a hummus appetizer, which came with pita chips, vegetables and olives.  Yum!

We were there early and the only ones dressed up at first.  The staff and other patrons admired our outfits.   Later on, more costumes showed up.  They  were going to have a trivia contest at eight, but we left before that.  Most of my knowledge is quite trivial, but for some reason I never do well at trivia contests.

I plan to return to Gerber’s 1933 Tavern soon, possibly for lunch, because there were a couple of sandwiches on the menu that’s I’d love to try.  They are located at 16 Liberty St., Utica, NY.  They are open Tuesday, Wednesday and Thursday 11:30 a.m. to 10 p.m., Friday and Saturday 11:30 a.m. to midnight, closed Sunday and Monday.  You can Like them on Facebook.  I did.