So Tired Tuesday follows Mental Muck Monday, everybody must have seen that coming.  For anyone that was worried (although I don’t imagine anybody was),  my writing abilities seem to have returned.  Um, not that I expect this post will reflect my best efforts, but I did work on my articles for Mohawk Valley Living magazine.   The deadline is looming; I must make haste.  In the meantime, I need a blog post.

I had thought I would be posting in haste (posthaste, there’s a word you don’t see much anymore) before getting to rehearsal.  First, of course, I had those articles to work on.  As I worked, I could hear the sleet striking my window panes.  Oh dear.  Luckily my rehearsal is not far.  Still, it was not going to be a fun drive.  This is why I don’t like being involved in the March production, but it is useless to repine about that now.  Then the phone rang.  It was the director, cancelling rehearsal.  Cast members who live farther away than I do had phoned him, saying they did not want to drive in this weather.  I didn’t blame them.

I’m sure some readers are thinking, “Well NOW you can write a decent blog post, can’t you?  Can’t you?”  And I’m thinking,”Apparently not.”  However, I do have a few pictures to share.  Not very good pictures.  Perhaps not worth a thousand words.  Then again, my posts don’t usually run to a thousand words.  Who has time to read thousand word blog posts anyways?  Not me!  Let’s look at the pictures.

These were taken Saturday, at the set-building session to which I brought the donuts (perhaps you read my blog post about it). 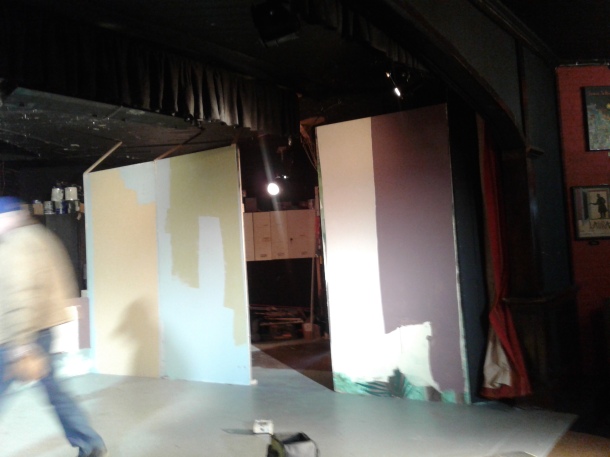 Two walls were already up when I arrived. And you see how fast our set-builders were working: this fellow is a blur!

There was much discussion about where the window would be.

They are discussing more walls to raise. The walls are there now, but I did not have my tablet with me at rehearsal last night.

Perhaps I can remember to bring my tablet to the next rehearsal and take more pictures of the set in progress.  At least I can hope to post pictures of the completed project.  And I will write many more word about the play itself, especially when the blog becomes All Steel Magnolias All The Time.  As always, I hope you’ll stay tuned.